Here's a puzzle for you to piece together: how can you help a pack of dogs evade the cops while getting the attention of a girl who won't pay you any mind even though you've got the moon on a string? PROTIP: You'll need two iOS devices to pull that simultaneous feat off! 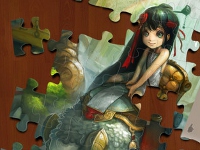 Jigsaw Mansion 2 (iPhone/iPod Touch, iPad) - Even if you're categorically opposed to jigsaw games, you should take the time to try out Jigsaw Mansion 2. It's a luscious, engaging, and utterly addicting puzzle game that's loaded with extras, and the controls are so buttery smooth you'll wonder why anyone bothers with real-life jigsaw puzzles. Explore a mansion while you complete jigsaw puzzles from portraits scattered about the halls. Simple touch and drag controls allow you to easily move pieces around, and auto-rotate takes some of the hassle out of matching pieces together. An in-game store opens up new puzzles and other possibilities, and you can even make puzzles using your own pictures, which can either be cool or supremely creepy. Also worth noting: the team behind Jigsaw Mansion 2 also created A.R.E.S.: Extinction Agenda, a superb sidescrolling action platform game for PC! Jigsaw Mansion 2 HD for iPad is also available.

Off the Leash (iPhone/iPod Touch) - The life of a dog is wrought is stress. Take, for example, running from the police, avoiding obstacles, staying away from stationary human folk, and gathering coins and power-ups, all while recruiting as many dogs as you can without stopping even for a moment. Off the Leash is just such a crazy game, utilizing motion controls for a mission-based arcade experience that's, well, completely off the leash. Control a pack of dogs running from the police while you work to go as far as you possibly can, increasing your pack size to gather more power-ups and switching your running formation to creep through difficult obstacles. It's an absolute riot of a game, and once you start completing and seeing new, crazier missions, you'll be absolutely hooked on this gorgeous game. From the same team that brought us the equally-awesome Land-a-Panda!

Boy Loves Girl (universal) - Valentine's Day isn't too far away, so it's time to turn your attention to amorous pursuits. Or, at the very least, play a game that involves an amorous pursuit. In Boy Loves Girl, you're chasing after a lovely lass while quite literally tugging the moon on a string. Swipe the screen to avoid sleeping clouds and other obstacles, all while completing missions that appear over the course of your run. Eventually, you'll catch the girl, but then a new twist is introduced, and you'll head off on another chase entirely. Cute, entertaining, and surprisingly challenging!