It's a huge dose of nostalgia this week on Mobile Monday. Developers have been porting classic games to the iPhone/iPod Touch for some months now, and two of the latest to hit — Myst and Wolfenstein 3D — practically gave birth to their respective genres. I remember when running either of these games required a top-of-the-line computer. Now my music player can run them!

G - Quite possibly the shortest name on the iTunes App Store, G is a game constructed around firing missiles in space in order to "ping" targets placed around the screen. Gravity beacons pull the missile off its path, so your job is to predict where the projectile will go and adjust the firing angle, launch power and firing duration to compensate. The story and visuals are remarkably complete, especially for an arcade/puzzle game of this nature.

iso - A falling block puzzle game that adds a little flavor to the classic genre. Groups of three blocks descend onto a number of platforms sitting at the bottom. Tap the screen to switch the blocks order, and swipe it left, right or down to nudge the blocks in that direction. The goal is to make groups of three like-colors horizontally, vertically, or diagonally. Setting up chain reactions is the way to go, and as you play, the game gives you a bigger variety of colors to make things even more difficult. The online leader board is a nice incentive! 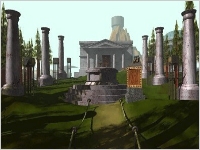 Myst - Yes, the Myst. The first, the classic, the graphic adventure video game that launched countless copycats and was the best-selling computer game of all time until it was knocked off the throne in 2002 by The Sims. Now, the point-and-click game is a touch-and-tap adventure with a deep, intriguing storyline, brilliantly conceived puzzles that are every bit as grand as they were in 1993, and a strong emphasis on exploration. The still images show the game's true age, but this is the kind of game you get so involved with everything else just disappears. It's a bit on the heavy side, weighing in at a healthy 727 MB, so be prepared to wait while it downloads or syncs from iTunes.

Wolfenstein 3D Classic - It's the original Wolfenstein! The game that (arguably) made first person shooters popular has returned in all of its 1992 glory! Using a highly-customizable control set, control William "B.J." Blazkowicz as he attempts to escape from the Nazi stronghold. Attack dogs and armed guards make your life more difficult, while hidden rooms, med kits and weapons give you a much-needed boost. The game may be a bit low-tech for modern gamers to fully enjoy, but nostalgia junkies will swoon at the thought of carrying this game around in your pocket. The free Wolfenstein 3D Classic Lite is also available.

I am very tempted to actually buy this!!!

Nitpick: That's not the original Castle Wolfenstein. (The original came out a decade earlier and was a 2D top-down sneaker/shooter). It was a really good game.

But I'd agree with you that Wolfenstein 3D was the game that made the FPS genre. Pretty nice to see the old games come back on the small screen!

Myst first time around and beer, what a combo.
But it's nice to play once every few years for that nostalgia feeling. For some reason unknown I can still run Real Myst on XP.

I vividly remember playing Myst on my Macintosh LC 520 not long after it came out, but I must have been too young to really advance far in the game.

It will be really nice to play it again and finally beat it.

After having spent some quality time with Myst last night, I am pleased to report that the game has not merely been ported to the iPhone, it also takes advantage of the touch screen interface.

When reading books in the library, the game recognized a swipe to the left or right to view the opposite page. It even recognized a diagonal swipe to go from the bottom of the left page to the top of the right.

I remember playing Myst back in 1993 when it was first released, and though our expectations and standards of multimedia today are much higher than they were back then, Myst is still an impressive and gorgeous game today.

Being able to play while in bed at night: awesome.