New games, updated games, and more accessible games! In case you were running low on reasons to bring your mobile device with you everywhere you go (deep sea diving, spelunking, meetings with your mobile game addictions therapist), here's a few new tidbits of info to keep you champing at the mobile bit!

Stylish old school platformer in the works - From Mixed Bag studio, forma.8 is a newly-announced iOS adventure platform game that looks like a delicious cross between Another World and Metroid. The team behind forma.8, based in Tourin, Italy, is dedicated to producing a visually beautiful game with strong old school-style sensibilities. There will be no virtual buttons or other distracting visual elements in your sight, just pure game. It looks fantastic, and we're excited to see more! forma.8 is due this winter, so there's still some waiting left to do! 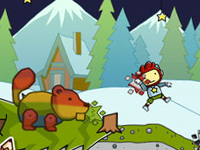 Scribble some more - MORE SCRIBBLENAUTS!!! That is all, now go play the game some more! Scribblenauts Remix for iOS has just received a handy new update that adds 30 new levels, new playable characters, and something called "World Pass" that can be purchased in exchange for free expansions and content update for free, forever. Anyone who purchased a DLC pack for the game in the past is automatically enrolled in World Pass, and as everyone knows, Scribblenauts is one game that's worth all the money and praise we can throw at it!

Kairosoft returns to iOS - Bummed when Kairosoft's latest game in the "Story" series, Dungeon Village, was released only on Android? Well now you can stop your bellyaching, as the ever-popular simulation/RPG is available for iOS devices as well! As the mayor of a struggling fantasy village, it's your job to rid the nearby hills and dungeons of monsters to everyone can live peacefully. How do you do that? By luring adventurers, selling them equipment, and keeping them alive! For the full scoop, check out our Dungeon Village review!

Uh, maybe you should actually look at Scribblenauts Remix before advertising it? The problem is that while they said 30, only 10 are actually accessable, and apparently other people are having issues with it as well.