No tricks in this Mobile Monday. Not a one. Just because it's that April 1st holiday thing doesn't mean we have to participate, right? We're still recovering from the massive influx of news from the two recent game-centric events. We've read all the news and carefully selected the most awesome bits to share with you. Because you're awesome. No tricks!

KlickTock's new strategy game - KlickTock, developer of Little Things Forever, ZONR and several other mobile games, recently teased a new release that's going to be a bit different than its previous games. Deck War is a casual strategy game fueled by virtual collectible cards. Players place a card on the field, the troops go marching and the spells are cast, and the skirmish heats up. This video shows some gameplay in action. Deck War is still in the very early stages of development but should be released sometime this fall.

Rocketcat unveils new RPG - It's no secret we have a bit of a dev-crush on Rocketcat Games, creator of Mage Gauntlet, the Hook Champ series, and Punch Quest. The studio's next mobile release, Wayward, is a hack and slash dungeon crawling RPG somewhat similar to Mage Gauntlet and described as Zelda plus Dark Souls plus Spelunky. Pick a class and dive into the game, fighting through randomly generated levels as you search for loot and try your best to succumb to permadeath. It looks fantastic and sounds just as great. Wayward is scheduled to hit iOS devices around May. Can't wait!

iCycle. Looks. Amazing. - From the developer of Wonderputt, this sidescrolling platform game stars a man carrying an umbrella riding an old Penny-farthing. Move forwards, backwards, jump, and pray to the bicycle gods that you don't crash into anything dangerous. Like, oh, a giant ice fish or basically anything sharp and pointy. iCycle is based on the earlier browser game Icycle and is expected to be released in just a few months. 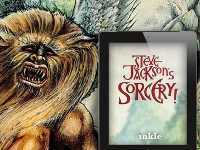 Interactive text gets more interactive - The folks at Inkle Studios haven't been napping since the release of the interactive novel Frankenstein by Dave Morris. First announced last year, the team recently showed off the new game/book Steve Jackson's Sorcery. The story plays out through prose with pathways to choose from and events to trigger based on the decisions you make. There's even interactive story-based combat and spells to cast, blurring the line between book and game even further than Frankenstein. Sorcery is slated for release May 4th. Have your reading glasses ready.