Ghosts return in this edition of Mobile Monday! Real ghosts (well, virtual representations of real ghosts) plus ghost-like games we all thought were gone but have come back to haunt us. The good kind of haunting!

Finland, Finland, Finland, The country where I want to be - Pause for a moment and wrap your brain around this. In NES-Retku, an upcoming iOS and Android (and PC) game, you play a Finnish YouTube-based game critic who gets sucked in a retro brawling game and has to fight his way out. Lots of mini-games, combat, platforming elements and wacky stuff to be had. Bonus awesomeness points if you already follow Retku's game reviews on YouTube, you're going to love this game so much harder!

Ghostly shall materialize - Upcoming free game about ghosts alert! The cute little iOS game Ghostly casts you in the role of a ghost haunting a newly-occupied mansion. Only instead of the bad kind of haunting, your job is to fix a beacon that keeps evil ghosts away so the new owners can get a good night's rest. How adorable is that? The game should be coming in the next few weeks. Be prepared! 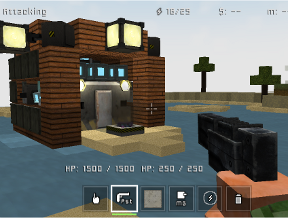 My Block Fortress, your Block Fortress - The tower defense meets first person shooter meets Minecraft mobile game Block Fortress recently received a tidy update that added a fantastic new feature. Before, you could create custom levels, play them, then pat yourself on the back for being so crafty. Now, those levels can be shared, meaning all the little boys and girls out there playing Block Fortress are now making more awesome stages to conquer. In our Block Fortress review we were all "this game = nice!", so if you haven't found an excuse to give the game a go, now's your chance.

Gemini Rue on iOS! - Did you hear? Gemini Rue on iOS! Yay! The soaked-in-mystery adventure game has crossed over to the mobile side, bringing with it all the old school visual sensibilities we love from the genre. Every excuse you get to play a Wadjet Eye adventure game, you should take it. The studio creates some of the best story-driven experiences of our time, and we've gushed on and on about more than a few of them in the past. Peer pressure dictates you play it.