Some classic games from several platforms have made their way to the iPhone, making pull-out-of-your-pocket-and-play much easier than before (laptops aren't so pocket friendly). Vector Park has finally dabbled in the iTunes App Store, and a familiar Facebook game also makes its iPhone debut. OH! And there's Worms!

Acrobots - Patrick Smith of Vector Park has ported his Acrobots webtoy to the iPhone so we can now take the little life-like bots with us wherever we go. Just touch to grab and throw them around the screen and watch as they interact with the other bots and their surroundings. The mobile app features the same fluid animation and features as the previously reviewed Flash app plus six new parameters to tweak: stickiness, air drag, balance, size, speed and quality. Several pre-set buttons provide for a variety of acrobatic fun on the go. Looking forward to seeing more of Patrick's creations go mobile!

Surfacer - All those hours spent trying to perfect your timing playing Boomshine will pay off, as long as you remember to do just the opposite in this sleek avoider game. Your goal is to add discs to fill up 2/3 of the screen. Seems easy enough, but the strategy becomes more like old-school Jez-ball when you get bombarded at later levels. Simple, addictive and free, baby! 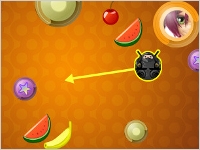 Bumper Stars - The popular Facebook game is now available in an app for the iPhone. The game features the same addictive arcade fun in a small, portable app. Bounce Bumpy Beaver around the play field just by touching and dragging to aim, release to shoot. Collect all the food to move on to the next level, and knock out all the bumpers for a score bonus. Play to earn credits that can be used to purchase additional gameplay items. The app even connects with your friends on Facebook (if you wish) via Facebook Connect. Just login to share your high scores and even challenge your friends. 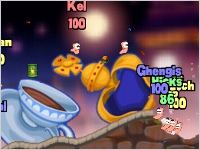 Worms - It's classic Worms gameplay on the iPhone! Your favorite weapons like the Banana Bomb, Holy Hand Grenade, Concrete Donkey, the Sheep and 20 others are all here. Throw in randomly generated maps and tons of challenges and you get quite a beefy game. Might take a bit to get used to the touch controls, but afterwards you'll have loads of fun with this one. It's even got multiplayer so you can blow up your friends, too!

Don't get me wrong, seeing these weekly posts about games for the Iphone really makes me want to get one, but for those of us running WM phones, will there ever be a post for us? :)

Worms! For the iPhone!!! I'm speechless.