I'm very proud to report no hobbits or halflings were harmed in the creation of this Mobile Monday. Technically, the two terms refer to the same thing, but one comes without the nutty aftertaste of lawyers. Also: no game in this week's article features halflings or hobbits.

MinMe - Originally created for the Experimental Gameplay Project's "Bare Minimum" theme, MinMe is a short puzzle game concept created by Chaim Gingold. Your goal is to collapse tiles into the numbered squares by tapping and dragging your finger along their surface. Clear the screen and you're good to go for the next level. MinMe leaves you hanging as soon as things get interesting with only ten levels to enjoy, but it's completely free, and Gingold has promised to expand the game if enough interest in shown. Translation: get the game and we'll get more! 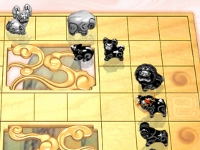 Animal Kingdom - A strategy board game similar to chess that uses animals and a small set of creative rules. Your goal is to capture your opponent's base by moving your pieces one square at a time across the grid. Each animal has a strength rating that dictates which pieces it can capture (equal or weaker) and which pieces can capture it. Tigers can capture bulls, for example, but only elephants and lions can take on the tiger. Some pieces have special abilities as well, such as mice traveling across water and lions leaping rivers. Loads of cerebral action in this puzzler, and the AI is quite good, too. A free Animal Kingdom Lite is also available. 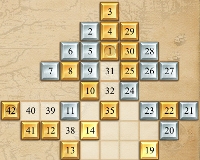 Hidato - A different kind of logic puzzle game, Hidato takes place on an oddly-shaped grid with a few number tiles scattered about. The goal is to move from the first number to the last by laying tiles in order. Each number must touch the number before and after it (e.g. 19 must bump one side/corner with both 18 and 20), and with enough thought you'll build a continuous chain so the ship can sail to the treasure. A free Hidato Lite is also available.

Parachute Panic - One of those "so simple I can't stop playing it" games with over 9,000 layers of charm slathered on top. Parachuters leap from airplanes that fly by the top of the screen. Tap each one to open his chute and use gusts of wind to direct them to boats below. Tons of tricky traps stand in your way, of course, such as birds and storms and other flying menaces. The pencil-scribble graphics and a capella music/sound effects are great! A free Parachute Panic Lite is also available.

You weren't kidding about MinMe's brevity. Good thing it's free, because I would've been a little peeved at spending money on a 45-second game.

Also, have Andrea Gilbert's mazes been featured on this site before? Regardless, Wriggle came out for the iPhone last week, and I'm delighted by the implementation. Perhaps it'll earn a future mention.

Animal Kingdom looks nice. Aside from Orbital, I don't have any single-phone multiplayer games, so I'm trying to find more.