Recognize any of the titles in this week's article? Two of the games below are follow-ups to existing iPhone releases, starting their own little series on the mobile platform. And the other two games? Well, one has bombs, the other numbers. That's neat in its own way, right? 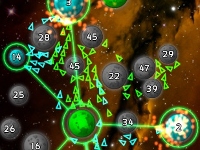 Galcon Labs - Galcon's Risk-inspired galaxy-conquering gameplay is back, now with more modes and multiplayer! Overwhelm your opponent by sending troops from your planets with a single tap to the touch screen. Take over planets and they begin producing troops for you to use, but be careful, as the enemy has ships of its own. New modes include Billiards with moving planets, Stealth with invisible ships, Assassin with assigned targets, and Crash with solid ships, allowing you to intercept enemy forces before they even reach their target! 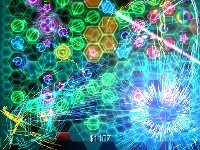 geoDefense Swarm - Everything you loved about the original geoDefense — fantastic visuals, well-thought-out gameplay, delicious tower defense structure — now with an open-ended design. Instead of taking out waves of creeps ambulating along set paths, you have a wide open field to use, allowing you to trap the baddies in your own maze of destruction. It's every bit as breathtaking as geoDefense, and if you're a fan of the more open-ended tower defense game, this is the one to try. 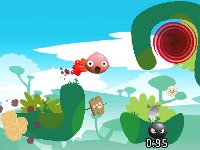 iBlast Moki - Somewhere along the line, bombs became a video game staple, appearing in just about every genre and having a wide variety of effects. iBlast Moki is a physics-based puzzle game that uses bombs to move those cute lil blobby critters around the screen, knocking blocks over and navigating difficult terrain in the process. After several levels, you get even more gadgets to play around with, such as ropes, balloons, and wheels. It sounds rather ho-hum on the surface, but touch-perfect controls and boatloads of personality and visual charm make it a clear winner.

Countdown - Did you get a kick out of Drop7 or DropSum? Countdown, formerly known as DownToZero, slides alongside those giants with one unique difference: it's speed-based. Single, numbered blocks fall from the sky and pile on the bottom of the screen. Touch and drag to combine sets, subtracting the numbers in the order you touched them. If they count down to zero, they vanish. Work as fast as you can, combining larger groups of blocks as the numbers get higher over time.