Time for more portable gaming! This week we've got a mixed selection of apps ranging from simulation to puzzle to card games. As usual, each game does something particularly well, whether it's a gameplay feature, an interface, or an innovative concept on its own. 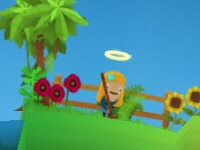 GodFinger - Your finger is now an all-powerful deity that controls just about everything on a tiny planet, including the weather, the sun, the people, and their jobs. Your goal is to get as many followers as you can. In turn, they produce gold which you can use to spruce up your planet and buy some cool buildings and items. GodFinger is similar to We Rule in a number of ways, including real-time gameplay that keeps progressing even while you're away, and the ability to spend real world cash to speed progress up. 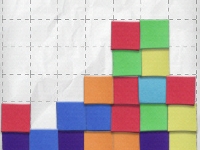 Colorfall - You've probably seen every matching puzzle game in the world by now, but you haven't seen Colorfall. Your task is to match the falling blocks in the order of the colors of the rainbow — red, orange, yellow, green, blue, indigo, and violet, or ROY G BIV. Any three colors in the right order will do, and it quickly becomes challenging to remember the order when blocks keep falling from the sky. As an extra bonus, iPhone owners can snap a picture with their camera to change a block to the most dominant color in that image. A very unique match-3 game you'll have a great time learning to play! 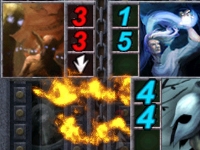 Dungeon Solitaire - A simple card game that has the uncanny ability to make you want to play it over and over again. Using custom cards with their own fantasy artwork, you must defeat the hordes of monsters attacking your castle. Place monster cards in the left column, hero cards on the right, and modifiers in empty spaces or on top of existing cards. Each character has a fight and magic stat, and when a hero is across from a monster, they do battle. The rules are simple and winning is just as much luck of the draw as anything, but you won't be able to resist round after round of the game.

God Finger is a pretty fun game! It is quite charming. Am I the only one bothered though that your gold can "rust"? I thought the fact it doesn't tarnish was part of the reason it is so valuable. Hmm, I think my followers are trying to pull a fast one on me...

I like God Finger, but I think that they should charge you for the app instead of the "awe" points. Stuff like that is a real turn-off for me, but I'm still keeping it because it's so cute :)

How about some Android games?