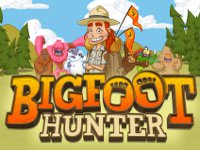 Bigfoot has been found - Or, he will be, anyway! The Tap Lab is preparing to launch Bigfoot Hunter later this summer, a photo safari game that turns iOS devices into Sasquatch locators. Using the iPhone's camera, Bigfoot Hunter creates a colorful virtual reality world that can place you in a number of different environments, from snowy mountain peaks to muggy jungle basins. Scan the area for rare creatures, then take a picture as quickly as you can. There are some fun features thrown in the mix, too, such as the Bigfoot Photobooth that lets you take selfies with surprise photobombs by the hairy beast himself! Keep an eye out for Bigfoot Hunter later this summer! 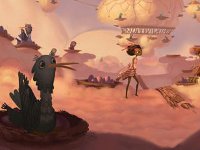 Broken Age now available for iOS - Just in case you haven't had enough of Double Fine's amazing adventure games, the first act of Broken Age has just made its way to iPad! The game that started the whole "Kickstart my gaem nao" flood was released on PC in early 2014. The mobile version translates nicely to the touch screen, replacing all the clicks with taps while preserving the graphical splendor that made the game so enchanting. Check out our Broken Age review for the full scoop. 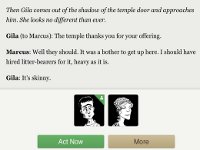 New interactive fiction from Emily Short - The interactive fiction community is alive and well, just ask the folks behind inkle games like Sorcery!. Emily Short is no stranger to pushing storytelling games into new territory, and her latest release Blood and Laurels does just that. Built with the Versu engine, this choice-based narrative is set in ancient Rome towards the end of Nero's reign. Instead of wandering from room to room solving puzzles, though, Blood and Laurels is about social intrigue. It allows you to scheme, betray, romance, conspire, blackmail and even poison characters. Each action affects other people in a different way, slowly building up their personality AI to create a surprisingly realistic social experience. 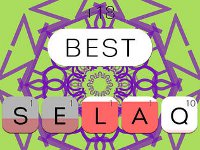 Spelling words like you're defusing a bomb - 4 Thrones creator Simple Machine's Lex is an intense game. Just released on iOS, the word puzzler is built around the concepts of speed and pressure. You have a row of letters sitting in front of you on the screen. Tap a few of them to spell a word, then submit. The letters refill and you stay alive for another few moments. You'll note that the longer letters remain unused, the redder they become. That's just the ticking time bomb getting ready to end your game. No pressure, just keep spelling as frantically as you can, hoping your brain coughs up a word that uses a Q, J and a Y.

On the App Store, "Blood and Laurels" says it's by a Richard Evans. Is this a pen name for Emily Short?

Richard Evans and I worked together on the Versu engine, and it's his developer account we're using to release content. (If you're curious, there's a bunch more about this at the versu.com website.)

I am curious about it. Your name is good for a couple of bucks dropped at the App Store, but I don't know Richard Evans from a hole in the ground.

So, can anyone tell what Google did that caused app makers to conclude that andriods do not exist? Just wondering, because searching for awesome sounding games that don't actually exist on andriods happens way to often.