Combining elements of exploration, puzzle solving, and some good old fashioned robot building, Mobiloid from Montrezina plays like the best parts of Metroid and Q.U.B.E. blended to perfection. It's a game that allows you to use almost two dozen accessories to create functional (or, you know, not so functional) contraptions that help you stick your nose in every corner of the world, uncovering new items, new parts, and new puzzles along the way. 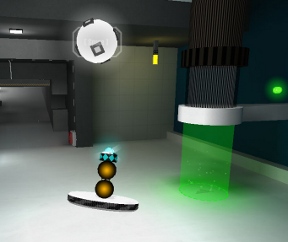 Mobiloid begins with a simple battery, serving as the core of every machine you'll build. Attached to its aft is a single rocket, allowing you to shoot through the tube deeper into the factory's core. Once you emerge, you'll find a few new parts to work with, with a list that eventually expands to include turntables, wheels, jump springs, grapple hooks, and more. By pressing [enter], you can switch to building mode, allowing you to pull off and attach accessories with the mouse. You can connect parts anywhere there is a node, but keep in mind you're going for function, here, so even though those wheels look like funny mouse ears, they'll probably serve you best underneath your contraption.

Switching out parts to adapt your robot on-the-fly is just one part of the game. The rest is centered around exploring a large, interconnected series of rooms and passages, winding your way through corridors as you encounter new obstacles and new items hidden in plain sight but just out of reach. In this respect, Mobiloid is very much like a Metroid game, encouraging you to revisit old locations with new gear to see if you have gained access to new parts of the game. 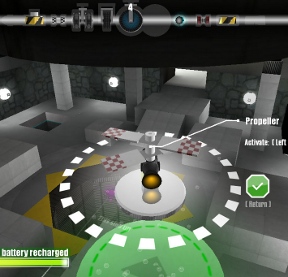 Analysis: Mobiloid is one of the most thoroughly entertaining games I've played this year. The map design is nearly perfect, teasing you with new things to find but keeping them just out of reach until you locate the required components. Once you have new gear, you'll quickly rush out to explore, hunting down battery expansions or trying to get those items you couldn't quite wiggle your way to last time.

Mobiloid adds a new dimension to the gameplay in the form of scannable objects. Just about everything can be scanned in the game, from broken machines to ramps, obstacles, conveyor belts and more. Scanning rewards you with a little bit of information that often answers the very question you had in mind (i.e. How the heck can I climb up that wooden ramp?!). It's a simple inclusion that also fills in some of the backstory and helps provide a sense of progression.

The most surprisingly fun part of Mobiloid isn't the game itself, it's playing around with your robotic companion. Since the accessory attaching system is so open ended, you can pretty much do whatever you like with the parts you find. Experimenting with designs is beyond entertaining, and you'll find yourself tinkering with ideas even when there isn't a puzzle that needs to be solved. What would happen if you put those twin wheels on the front, attached with a flexible rod, for example? Or maybe that electro gun of yours could reach new targets if it were, say, a bit more turnable? The possibilities feel like they're endless, and when combined with the game's already grandiose sense of exploration, you'll feel like a pioneer uncovering new ground with every movement.

Mobiloid is fantastic. Few games manage to balance puzzle, building and exploration elements quite so eloquently as this unassuming little game. The main adventure will run at least six hours from beginning to end, more if you take the time to be thorough. Coupled with the online high score board, a series of achievements, and other extras, you've got the makings for one phenomenal indie game.

I really, really, really love this game. The demo was longer than I had anticipated, and it already had quite a variety of gameplay elements. And then to think that I had only found 6/21 parts, meaning there's still plenty more in the full version. I'll definitely be getting it, once time and money allows.

Does anybody know where the second turnip switch is? I can't find it and while I am detecting it, I can't find the path to it.

the one in the building on the other side of the bridge and the one on the 'race track'.

Edit: I found a missing part that I had missed through a video and spotted where the second turnip is, but I don't know how or where to get around the instadeath floor.

the second turnip switch can be reached using the GrappleBeam
wait outside the roller until you spot the grapple thing
then dash over there and grap it, and wait wait wait till you are safe down there.

btw, i hate the collision glitches so much, especially the third turnip switch:

whenever i almost done spining or just touch it, i got bounced off and have to do it all over again and again.

The desperate moment when i respawn during the "switch unlocked" scene :(

This review seems to be missing the "Windows" tag.