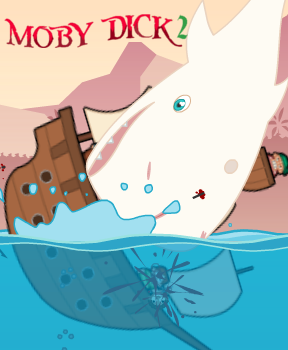 There's plenty of hubbub about saving the whales, but we've really got to be worrying about our own hides. Whales are dangerous, you see. They're huge, they've got teeth that are larger than your head and in Moby Dick 2, the arcade action sequel to the original from Mostro Games and La Ventanita Studio, they're even upgradable! Humanity doesn't stand a chance.

Use the mouse to steer Moby Dick around and cause chaos. Wanton carnage earns you upgrade points that you can use to become larger, faster, tougher or a bit less hungry. You'll need these upgrades to survive wave after wave of whalers and natives out for delicious blubber. Most of the strategy in the game revolves around carefully choosing what to upgrade; becoming larger is great for destroying boats, for instance, but you also become a bigger target which can be a problem without also upgrading your health and toughness.

While there isn't much different from the original game, when you're talking about whale-on-mankind carnage and silly action mixed with upgrades, that isn't necessarily a bad thing. Moby Dick 2 makes for a great, if very familiar, half-hour of destruction. It's also a great example of what will happen if we don't develop anti-whale countermeasures immediately. What happens when they develop firearms? What do we do then? We'll just have to hope Captain Ahab is around and armed with a minigun to save us all.

I like the way I'm able to change the levels of my whale's different stats in-between upgrades to better fit whatever situation he's currently in. I don't care for how hard it is to find a health powerup at my current level though.

Still, there is something to be said about the experience of smashing through a line of ships in seconds before looping back to devour the poor souls who fell into the briny deep after you attacked their ships. I think it's my inner "Rampage" fan.

& somehow my whale manages to be cute in spite of the game itself talking about how much he loves to eat people.

I like the style, and I like the new upgrade system, but I find it far too awkward to control.

I found that in the latter waves, having spent the majority of my points on regeneration and health, that the

Aliens were pretty much impossible to hit. They fly much too high.

Even draining points from other areas to fund diving, speed and size didn't help :/

I had to resort to grinding for achievements, which give you points, but this was still not enough.

Apart from that, I loved this game :)
Very upbeat, despite the carnage :D

was a game-stopper.. may be it's the last level? ..lost interest so it became that anyway.

i'm stuck on wave 32! great game but the aliens are just too damn high!!

It's pretty easy to jump high if you max out the boost.

The game was pretty fun, but It didn't really need to continue past level 30. Once you max out the health and regen upgrades, you're pretty much invincible (up until the later waves where you get spammed with enemies.) The difficulty curve falls after around level 30, and the rest of the game is basically working for achievements and upgrades that you don't need.

The last level is 50, and I assume the level is endless. There are 40 enemies on screen at once, and they keep respawning. It is a bit of a letdown that there isn't a proper ending. Also, the text between levels becomes a bit less like a story and more like "this is the theme of the next wave" near the end.

Despite all that, this game has a delightful mechanic and the first 30 or so levels were very enjoyable.

A note on Achievements:

I was struggling with the aliens too, but then I realized that you have to decrease size to get better lift, and increase BONUS. This is very important, without your bonus you will not be able to reach them.

I have been having a hard time with the aliens as well. Right now I'm stuck on level 19. Does anybody have any other suggestions for beating them?

FACEPALM
The aliens are easy, you just need to pimp speed up, that affects your jump height too. I have bonuses on 0. I can hit the highest alien with little trouble.

To reach the aliens or the three moon heights:

just max out "boost" and "diving". Then swim to the bottom, face the surface, left-click boost and point the mouse towards the far top of the screen. I don't think your size matters at all for this.

write to the programmers and tell them to change the final level. It's designed to be unwinnable. The enemies on the screen will keep respawning to 40, no matter how many you destroy.

I found this a very unsatisfying ending, after slogging through all the previous waves. It would have been a real challenge to beat the final army of ships (you can resize Moby to avoid the mines/missiles to regain health/collect bonuses, and it would have been difficult but possible to destroy them all, and a decent ending to the game.

Instead, as far as I can tell (and I've tried pretty damn thoroughly!) you just have to give up. Ho-hum.

Daisy512:
Like others said, max out the boost, speed, and 3/4 of the size is pretty good. IMPORTANT:

If those aren't maxed, try to face down before clicking boost, or facing the side, and then curving up; I'm on level 40, and I've found that helps sometimes, especially on earlier levels.

Also, you could try the first game. It's just as fun, and I've never managed to finish it, but it's easier than this one =)

Others: I was planning to ask about the last level. That is kinda dumb...

HEY, PROGRAMMERS, LISTEN UP! IF YOU'RE READING THIS, PLEASE CHANGE THE LAST LEVEL AND THEN RENAME THE GAME AS "MOBY DICK 3"!