A pickpocket, a locksmith, and a hacker walk into a bar. You wouldn't know it though, because the hacker planted a virus in one of the bar's electrical outlets that shorted out the lights for twenty seconds. During that time, the pickpocket's monkey snuck up behind you and grabbed your wallet out of your pocket, and the locksmith stole all of the money from the cash register (and a couple bottles of cognac, if that shelf behind the now-pantsless bartender is anything to go by). They then escaped out the window and ran for their getaway yacht. Such is the life in Monaco, an International Games Festival-winning multiplayer stealth arcade game by Andy Schatz of Pocketwatch Games where grabbing the loot is just half the fun. 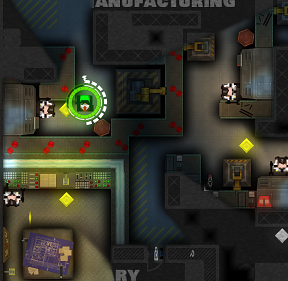 Most of the missions you'll encounter in Monaco require you to sneak in or out of a high-security facility of some variety. You might be robbing a bank, erasing security footage, or rescuing a comrade from captivity. Use the [arrow] keys or [WASD] to move around, or hold [shift] to move slowly (helpful for sneaking past people in close proximity undetected). To unlock doors and safes, pick up equipment, or disable electronics, walk up to your target and hold to fill up your progress meter. When you gain weaponry to knock out or kill guards that may attack you, aim using the mouse and fire with a sharp click.

But what fun is a heist if you don't case the joint where you're at it? There's tons of gold to be found on each floor of the facility, both lying around loosely, and tucked away in safes and cash registers. Sweep up all the gold you can find to help unlock future levels, and also to avoid a time penalty on your final score for the level. If you need to recap your current objective or how much gold you still need to find, tap the [control] key.

Don't expect your plundering to go unchallenged, because your crew is severely outnumbered by a plethora of armed guards, attack dogs, and sensors that can set off alarms that draw everyone to your location. Most sensors can be deactivated by manually disabling them, or hacking computers to set up a virus to temporarily disable them. As for the guards, you'll have to either be ready fight back with a weapon or know where to hide, such as in bushes or overhead ducts. 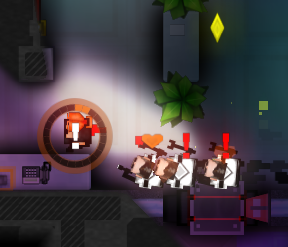 To start, you have four characters to play as, each with their own special abilities. The Locksmith is quicker at unlocking doors and safes, the Pickpocket has a monkey that can pick up nearby gold for you, the Lookout can detect hidden enemies across the map, and the Cleaner can knock unsuspecting enemies unconscious. In later levels, you can rescue more members for your motley crew, such as the Mole who can burrow through walls, the Gentleman who can disguise himself while hiding, and the Hacker that can create an electricity-shorting virus from any outlet.

Each mission is playable in both single-player and multiplayer modes. While in single-player, when a character loses all their health, you're required to choose a new character to continue the mission from the last staircase used (until you've used a total of four lives). In multiplayer mode though, you've got to rely on your teammates to revive you, all while they're hunted down by the same folks who took you out, and once everyone's been downed, it's game over!

Analysis: While Monaco has to be classified as a stealth game, there's a certain sense of non-stealthiness that makes the game a lot more thrilling. It's next to impossible to complete a level without being spotted (if not chased and shot at) at least once, if only because it's impossible to predict where a guard might be walking without walking into their line of sight first. If you're quick to respond to the situation, you can make a simple getaway. If you bumble around a little bit, you might be in for the chase of your life, running through every room as fast as you can, tripping every alarm and bumping into every confused guard as you panic searching for a ladder to escape above ground. There's joy to be had at both ends of the stealth spectrum (although you're likely to have an easier time if you can stick to the former end). 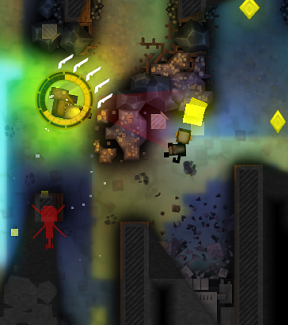 This spectrum transfers well to the multiplayer mode. Once you've played through a few levels alone, try jumping into a multiplayer game, and with friends if you can. Even if you start by planning out your perfect crime and coordinating everyone's movements, it will usually devolve into a chaotic free-for-all with all parties shouting commands at one another while being chased by guards like ghosts surrounding a Pac-Man.

With each level with new elements added in, there's a bit of trial-and-error involved in figuring out how each new tool or sensor works. Sometimes you can clean out a level on your first attempt, more often you won't. The game never throws too much at you that you'll be overwhelmed, but that's not to say it'll be easy. In a sense, Monaco's difficulty curve is a comfortably steadily rising one, although it's been placed on a small stepladder to start.

As you catch a glimpse of useful items in your field of vision while passing through a room, these are stored in your memory and appear on the blueprint-style map when you round a corner and can't physically see them anymore. This is a neat idea and really helps when you're trying to find that last bit of gold on a floor. This "vision" mechanic can backfire a bit if you don't remember that sometimes things that look like walls aren't necessarily walls, such as half-height countertops that guards can look over and spot you. While each level is a maze with carefully constructed corridors, it's easy to forget that some of those hallways give you less cover than others, and the game won't hold your hand in reminding you which is which. 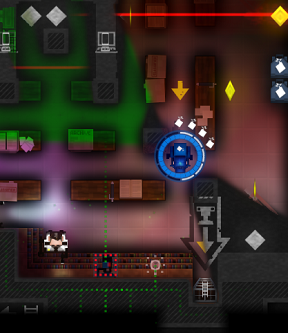 The stealth mechanics of this game really stand out in the sound effects and music. When you're running through hallways looking for a quick escape, the jaunty old-timey (read: out of tune) piano accelerates to fever pitch, matching your hectic pace and making the game feel like a scene from a black and white train heist movie. When you've found cover and evaded capture, the music slows back down to silent, allowing you to keep an ear peeled for approaching footsteps and enemy reactions. Add to this the chipper pings of bicycle bells and beeps of security systems, and you've got an audibly satisfying game that lets you know your status at all times.

The variety of characters allows you to not only find a play style that you're comfortable with, but also provides a very fulfilling story, even with minimal dialogue between levels to set it up. It's easy to fall into the story, and doing so heightens the tension you'll experience as you try to pull off the perfect crime (and inevitably fail). Round up the crew and get ready for the heist of a lifetime, because "What's Mine is Yours, and Monaco is Mine!"

Mac OS X:
Not yet available. A beta version is expected in May.

I can't find ANYWHERE on their website where it says WHAT the 4 pack is. Is it 4 different games, 4 extra levels or what the heck?

The 4-pack is 4 copies of the game for cheaper than it would cost to buy 4 single copies (either get 3 friends to chip in, or gift the other 3 to your friends). You get 4 DRM-free versions and 4 Steam keys to go with those for updates, multiplayer/co-op, and leaderboards.

From watching videos I couldn't get past how visually unappealing this was, and the caper music didn't help.

It seems to be a top down co-op Stealth B*stard/SB Deluxe with bad graphics, silly music and sloppy mechanics.