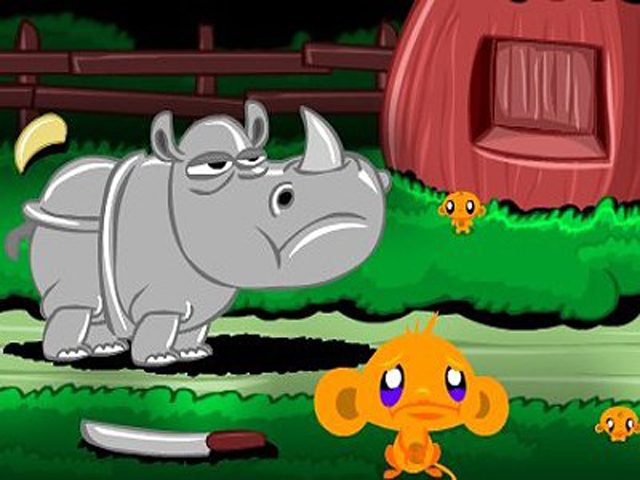 "Hey Hey they're the MONKEYS!!" OK maybe it's just me but I love these little guys. There's something inherently playful and mischievous about them that makes me smile. Seeing that PencilKids had made yet another installment had me immediately...um postponing some work I need to be doing and diving into the hijinks.

Start with the good news. This is not just a cut and paste of old episodes although the title may be in danger of causing people to think so. It's divided into little scenes so there's no attempt at story. They're just monkeying around. The animation is bright and, well, animated (there are a lot of moving parts and activity). It's creative even if there aren't any real suprises. There are also bunches of little monkeys hiding all over the place to be found. The little rascals keep getting loose.

The not so good news is that this one is pretty easy, even by monkey standards. It's also short. Maybe those things go well together. It's a little monkey playdate. I did miss the slightly more difficult puzzles and having to hunt a little harder for the clues. That gets lost with so much less area to explore. There may also be a tiny glitch at the end (which may also just be me, you never know.) This is another one of those 'play through the levels to get the code' type games. When I'd played through all 4 levels I couldn't get the code to work, even after trying a few times. That isn't really much of a deal breaker for me since the code just opens the 'safe' where there's a bunch of toys for the monkeys. If it were a fifth level I guess I'd care.

The long and short of it is this. If you're monkey mad like me (I've even named one Davie) or want a fun, stress free way to spend a little free time this is a good pick.

EDIT:
Looks like these 4 are the beginning of a new series. Now instead of Monkey GO Happy we've got Monkey Happy. (I guess they don't need to GO anymore?)
Check out www.MonkeyHappy.com for more levels.

Strange that the interface for using objects has changed. The new way is much more clumsy than just having the items at the top of the screen, but I guess the new way wastes less screen real-estate.

I wish they would change the nearly-unreadable-brown-on-black style of presenting some clues. Surely there's a way of hiding clues that doesn't involve actually hiding them from sight. I try to remember to paste screen shots into Paint and then expand all the dark areas to see if there's something there.

Thanks for posting my game, I really appreciate it.

The reason for dropping the Go from the name was because I wanted to start an html5 site specifically for Monkey GO Happy but someone stole my domain name. So I had to release it under Monkey Happy instead. There is weekly updates now :) Tuesdays and Saturdays.
I also changed the inventory system because I didn't want any problems dragging objects while in your browser when on a mobile device (monkeyhappy.com works on new mobile devices).
Also, as you mentioned it clears up some space on the screen, so I hope you can get used to it :)

I will try to make the clues more visible for you guys :)

I hope there isn't any glitches as I tested for hours but if there are please let me know.

I'm very happy to listen to your suggestions :)

My wife and I just had fun playing all 21 of these, the only anti-climactic thing was noticing they were groups of four and expecting 21 to be some super amazing final stage after the 5th set, when in fact it's just the first of the next group of 4. ;) We didn't have any issues with any of the hints though, occasionally we had to double check for that last monkey... Thanks for putting them together Robin!

Thanks very much for playing :) I see what you saying with the anti-climatic feeling of coming to stage 21. I'm not sure if I can fix this as there will be regular ongoing updates every Tuesday and Saturday but I guess I'll have to throw in some large levels in there at some point :)

Thanks again for your feedback. It really helps out.

Robin, your games are the best!! I have played them for years with my granddaughter. This installment was a lot of fun, and I didn't have any problem with the item interface. You create such cute characters, and I like it when they "need" an item (or 10), then finding items and giving them to the character. You always have creative hiding places for items. The puzzles are almost always simple to solve, which I prefer. I like finding and using objects, rather than complex math problems. THANKS AGAIN for your wonderful "Monkey Happy" games, which have given me and my granddaughter many happy hours!

Thank you so much your kind comment and thank you and your granddaughter for playing my games. I hope I can keep creating games for you guys for years to come :)
Robin Vencel

It's great to see developers listening to feedback on sites like this. Thanks for staying in touch with your audience. I love all of the monkey go happy games, and I was also thrown off by the new inventory interface. I will give it a few installments to see if I get used to it.

I personally enjoy all types of clues and hints, but I completely understand what Lynne is talking about. My 3 year old son is addicted to the Monkey GO Happy app on our Kindle and he can do most of the puzzles that just involve finding and using items. But at this point he is unable to do the puzzles that involve math, roman numerals, and mini games that require fast reactions. It would be awesome if you could make a dedicated game or series that is catered to a very young audience.

Again, thanks for listening!

Thanks for the feedback :)

I'm happy to hear your 3 year old son is addicted to my games. I guess if this monkeyhappy.com website grows I will be able to branch off into making a Monkey Happy Game for the iPad specifically targeted at small children with no overly complicated maths/puzzles as you mentioned.

Meanwhile, I hope you can enjoy playing the games with your son :)

Thanks very much for being a fan!
Robin Vencel

same here, I enjoy playing with my son, even at 10 years he like the monkey games.

I found one glitch in this version 'Monkey Happy 1-4': If you fill in the files safe code one by one, just after finishing the corresponding stage, the safe does not open, even with the correct code. I had to change the code to something different then back to the correct code, before it worked.

I agree with the others that the original interface to use tools is simpler, but I also agree that the current interface is necessary for touch devices. The change from mouse (& flash) to touch (& html5) is finally coming to all of us ...

Thanks for hours of fun !