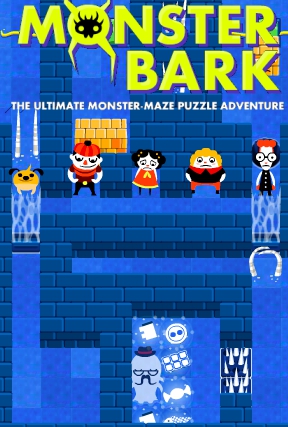 Monster Bark: The Ultimate Monster-Maze Puzzle Adventure. Any game with a tagline that boastful had better be a good game... and it looks like Joey Betz has done it again. The game stars Bark, a lovable floppy dog whose toys and friends have all been stolen into a dimensional portal to a world of monsters. He, being a brave dog, jumps in to retrieve them. He roams the world using the [arrow] or [WASD] keys, avoiding monsters and collecting toys. As he rescues his companions, he gets their aid as well in solving the fiendish puzzles this world has to offer. Switch control among them by pressing [1-5] or by clicking their portraits.

Bark's friends all have special abilities that can be used with [spacebar]. Charlie, the Tough Kid, can jump over holes and push small boxes; Darcy, the Screamer, can tiptoe past sleeping monsters without alerting them and scream her lungs out to stun monsters and activate certain switches; Ed, the Heavy Kid, can smash large blocks with a sort of rolling dash and hold down pressure switches by standing on them; Floyd, the Nerd, can slip through narrow passages and fix broken wires. (In case you're wondering about Bark himself, he can duck under low arches and has the fastest movement speed of the five.)

Analysis: If I were to describe my dream puzzle game, it would be something like Monster Bark. Just about everything in it is done right. The characters are so full of personality, thanks to the artwork of Adam Vian, from Darcy's nervous swaying idle stance to Ed's pompous walk to the cute but useless bark Bark does when you press space, and the groovy but appropriate music just makes me want to get up and do a little monster dance.

The "switch between multiple playable characters with different abilities to help each other through the stage" gimmick is one that's been around since a certain trio of vikings got abducted by aliens back in the SNES days, if not longer, and if done right, such as it is here, it makes for some very clever puzzles. Personally it's one of my favorite gimmicks, and you can really see how the puzzles are designed around it as you play. The game is also relatively light on Sokoban-style block puzzles, which is lucky if you find those games tedious.

The only serious fallacy the game has is with the controls. Controlling Bark and co. is like driving a car on an icy road; sometimes they won't respond immediately when you press, switch, or release the keys. This makes quick, controlled movements nearly impossible, which can really drive you up a wall if you don't slow down and take your time when making moves you can't undo. There's also a few glitches elsewhere; for example, don't press the [spacebar] while the characters are teleporting out at the end of a level.

Still, that's easy to overlook in an otherwise great game. Go play it and decide for yourself whether this game deserves the tagline "The Ultimate Monster-Maze Puzzle Adventure". My opinion? It probably does.

I'm a sucker teamwork puzzles, so obviously I liked this one. As top-down ones go I think Fiends (from CGDC9) has tighter puzzle design, but this is still great. And it's hard to complain when there are just so many levels, too.

Cute, but a bit too clumsy for me.

Fun but slow, and way too easy. There were no real head scratcher puzzles, but I too am a sucker for these types of games.

Good fun - i always like this type of puzzle game with some sokoban incorporated. i'm guessing it's probably aimed at a slightly younger audience as the puzzles aren't massively difficult.

Completed it, was great.

A little embarrassed, but I can't quite get level 37. Do you have to do some reeeeeeally quick moving?

I end up baiting a ladybull by walking Charlie down the central passage and then running him up out of the way immediately but that leaves Bark to get trampled. I could move Bark down to just above the lowest spikes, but then the bull hits Charlie.

you need some really quick moving,but not here.let the ladybull break the wall and chase Charlie first,just leave Bark there.

Reminds me of Fiends too.

Hmm... I never made the Fiends connection, and I reviewed that game too.

I think I found a glitch. I skipped one level (number 29, I believe) and when I finished the final level, I got an error message and I couldn't get back to the menu screen. I reloaded the page, beat level 29, and nothing happened. So I finished the last level a second time and then I got the ending sequence.

I liked this game, reminds me very much of Lolo (NES!) and Sokoban. It was a little easy but at least I wasn't pulling my hair out in frustration.

Best most enjoyable game I have played from Jayis. It is incredible how much personality each character has - Love it!

This game is SO DELIGHTFUL. I vocally giggled with joy when the little blocks got all happy when I pushed them around. The puzzles are really fun, the characters are all brimming with personality - in fact, all the animation is wonderful.

Delightful in every way :D.

With all due respect, Phantom Mansion is still the best monster maze puzzle adventure. Hee.

Very cute! It makes me want to play Haunt the House. The animation slowing it down does get a bit frustrating at the very highest levels.

(Also, I wonder what happens when a game is called "avian" and isn't by Adam Vian...)

Escape from the Condo

4,497 Views
1 Comment
chrpa— Jayisgames needs your help to continue providing quality content. Click for details ...and here we have another late Christmas present, the third one, from Neat Escape. The authors have made the original mobile game, which is almost three years old,...  ...

4,413 Views
2 Comments
chrpa— Jayisgames needs your help to continue providing quality content. Click for details Welcome to the second visit to the Forgotten Hill Museum by FM Studio! Several years ago, Mr. Larson embarked on a long journey to uncover the secrets of...  ...

5,032 Views
7 Comments
chrpa— Jayisgames needs your help to continue providing quality content. Click for details We escapists got our first Christmas present, a new game from Masa - and it's great! You find yourself in front of an elevator, which you'll get...  ...

8,236 Views
8 Comments
chrpa— Jayisgames needs your help to continue providing quality content. Click for details Hello and welcome to the Christmas Special... which is quite modest. You all know the reason. So to start off we have two games from RoomEscapeMaker that...  ...