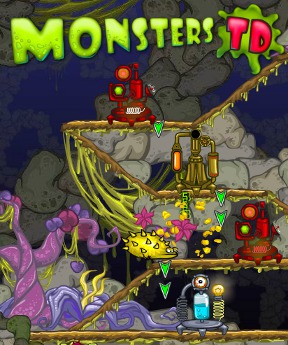 Monsters never seem to have altruistic agendas. Whether it's scarfing down brains, scaring children, or mucking about with your spreadsheets so you think you did your taxes wrong (the horror!), if a monster comes near, you should probably ready your defenses. Such is the case with Monster TD, a well-illustrated side view tower defense game from Booblyc, the same team behind the physics puzzle game Steampunk.

More than half a dozen different types of monsters are out to take over your portal, probably because that's where you store your open containers of Monster Chow. They crawl in from one side of the stage and walk through the level to one of the exits. Place towers to dispatch these creeps by clicking the icons in the background. You can only build where there's an available slot, so think about what you're spending your gold on before you click!

You have three basic tower types to place, each with its own relative strengths and weaknesses. Steam towers are good bases for blasting anything that walks by, while fire towers shoot a less powerful continuous shot at creeps. The eye tower exposes invisible enemies as well as slows everything down, a critical ability in some levels. Each tower can be upgraded by clicking on them and spending some coins. Upgrades increase range, damage, and often introduce new abilities. Later, these tower types can be transformed into even more powerful towers, such as the chain lightning tower or the rocket tower! 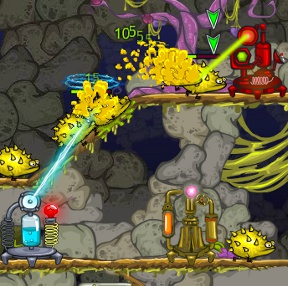 In addition to monsters, towers, bosses, upgrades and achievements, Monsters TD also includes three spells you can use. Magic beam fires a vertical wave of ouchies that harms every enemy in its path. Stop, well, stops monsters for a brief period, while gain temporarily boosts stats for your towers. Upgradeable skills round out the game's customization offerings, allowing you to boost your three tower types or fiddle with the amount of gold or "lives" you have.

Analysis: Although they're two very different games, Monsters TD may remind you of another side-scrolling monster-defeating tower defense game, Monster Castle Defense. This one is quite a bit simpler, however, focusing your attention on tower upgrades and placement as opposed to stat management and customization. It's an easier game to get into, and an easier game to complete, as well.

Monsters TD stumbles in two general areas: difficulty, and learning curve. While it's very easy to play the game without any sort of tutorial, learning what towers do and what stats change with each upgrade takes time. Unfortunately, none of this information is available from the main game, you have to stop playing and access the in-game guide to do research. As far as difficulty is concerned, Monsters TD keeps things locked down, restricting your choices and thus your chances for failure. For example, you can only place towers in certain areas, eliminating one common avenue for forming your own strategy.

Aside from an interface hiccup or two, Monsters TD is a good looking and highly enjoyable tower defense game well-suited for casual strategy fans or anyone who isn't looking for a tough challenge. Not only do you get to protect our world from a monster invasion, you get to do it with lasers and potions and rockets!

Solid TD with a few flaws. The graphics are very nice and the animation is sweet. I also like the different kinds of towers, the upgrades and the accesability of the game. You don't have to spend hours to get into it, simply start and have fun.

What I don't like is that when the levels become bigger at the end of the game Monsters TD gets confusing, because you have to scroll up and down and left and right all the time instead of concentrating on building the right towers in the right place. Since the game is unsing only approx. 20% this is very annoying. Why do most of the games use so little space and refer to scrolling instead of making the playing field bigger? I cannot understand this.

Monsters TD is too easy and offers the player not enough possibilities to choose a tactic. And it is very short, I've finished most levels in a few hours without one monster getting through, and I stopped playing the last level because I found the level design in combination with the small screen too confusing.

Nevertheless I had fun playing it. Its worth a look.

I liked it. The last level is tough and I've not completed it without leaks as of yet.

The screen size is an issue though. I have a large screen so why can't I use it? An artificial restriction just there to annoy people. (This goes for many games not just this one)

However.... There is an in game zoom. Try pressing the '+' and '-' or press ctrl and use the middle mouse wheel.

I was enjoying the game except for when just about every time I clicked on a tower to upgrade it the screen would scroll away from it, often times it would do it and I could no longer see the tower.