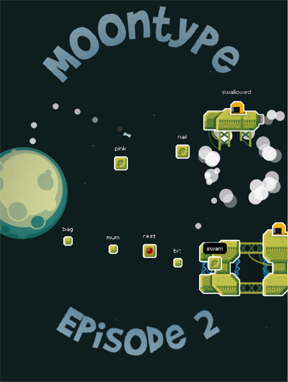 Flex those metacarpals, because the moon is in danger from alien invaders and the only thing standing between it and utter distruction are your typing skills. I really do hope you were one of those kids paying attention in 7th grade typing class and not just playing Math Blasters, because the entire human race is depending on it. Moontype: Episode 2 by Chman is a fast-paced action arcade typing game where you need to keep enemies from destroying our beloved moon by quickly blasting them out of the sky. Just type the name that appears over an enemy's head and hit [enter] to fire a rocket at it, and try to keep them at bay across each stage. Your moon can only take a certain amount of damage, so you'll want to keep any baddies and their own fired projectiles at bay by typing as quickly as possible to take them out before they reach you.

The game features smoother graphics than the original, a choice of difficulty settings (Hurt me plenty!) and, for the more mathematically minded, a numpad typing mode, which will blow most players out of the water. In fact, anyone who beats even the easiest of these levels deserves an honory Administrative Assistant degree from their nearest accredited community college. Throw different play modes, like survival and quick race, into the mix and you have a great little game that'll keep you playing long after you beat all the regular levels and have been fired from your cushy middle management job for playing video games instead of, you know, working. If your boss does happen to walk by, you can say you're practicing your typing, right?

I know these games are geared more towards children, but man do I love a good typing game! This is really fun and actually gets pretty challenging as the levels progress! I'm impressed!

Hmmm... the game isn't loading for me. I got all the way to the screen right before the game starts where it asks if you want a tutorial (clicked yes, the tutorial played), and then nothing. I can still see the little speaker icon in the top left corner but the rest of the screen is blank. Flash player is updated. Any thoughts?

How do you kill the "empty" one? Or is that a bug?

Cute! But so tiny. I can't see the words without leaning right up to my screen. Otherwise, it's perfection. I'm with hothotpot....love me some good typing games!

Another typing-game lover here. Sailed through with perfect scores up until Hurt me plenty level three. There my planet just keeps getting mauled.

However, the small conspiracy theorist in me tries to tell me I'm being sneakily mindwashed while playing this game. Some of the words just seem so... deliberate.

I think, well, on the numbers side of it, that exact same level, (*equip tin foil hat*) kept spouting out a little tile with no number!

((humm just peeping around, it seems it may have been fixed !))