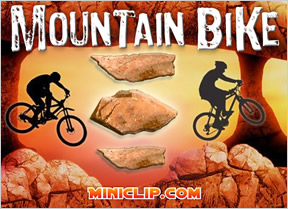 Over the years we have seen countless biking games. From the BMX series from the masters of bike physics over at Teagames to the ever-challenging Trial Bike series from RedLynx, the biking genre of casual games will always be a comforting choice—the "macaroni and cheese" of casual Web games. The top biking games have inspired countless clones. But this is not a bad thing. I give you as proof the latest in the genre: Mountain Bike.

Mountain Bike is a charming little 2D stunt biking game indeed. Controls follow the genre standard: [up] arrow to accelerate, [down] arrow to brake, [left] and [right] arrows to lean backward and forward respectively. Also included is the ability to do a 180 degree spin by pressing [space bar]. This can be used as a trick or to change directions.

Although you have infinite lives, the game is timed. Crashing sends you back to the start of the level and takes ten seconds off of the clock. If the clock runs out, the game ends. However, each new level adds more time to the clock. Doing tricks will boost your score, but also make you crash a lot. Thankfully a trick tutorial is provided for those of us (myself included) who don't already know the difference between a toothpick grind and an icepick grind. Oh yeah, did I mention the grinding? This game boasts the best implementation of grinding I've ever seen in a biking game.

Analysis: How could you not love a great biking game? It has everything one could ever ask for: wonderfully rendered levels, annoying rock music, and best of all, a mute button for that annoying rock music. And the physics are interesting! Yes, they do take some getting used to. Often I found myself rotating way too quickly in the air. Other times I under-rotated and landed on my head - we all know that feeling. But once you figure it out, you can really do some cool tricks. My favorite combo is to start out doing a backflip, then press the space bar halfway through to turn it into a front flip. However, if you really want to rack up points, don't listen to me. I placed a humbling 1862nd on the daily high score list.

One high point of the game is the grinding, which only requires you to ride onto a rail. Then you can either ride it until the end or drop through to the ground below. Another highlight is the level design. They even included an ode to a trials course! But by far the most entertaining part of the game, as with all bike games, is watching your bike crumple and fly apart as you careen through the air screaming (at least I like to scream) when you crash. Oh the times I've had with good ol' ragdoll physics... To conclude, I present a challenge: Find a good use for the "wall ride" trick.

This doesn't even come close to the teagames physics. The graphics are ho-hum. Also the load time was a bit long for my preference. Not really that great a bike clone...

Thanks for the games Jay!!

Dom - which link would that be?

Im stuck at the level with the bricks. I wish there would be a way that I didnt have to start from the beginning everytime I get to my time limit.

Meh... the game has some pretty smelly physics. More often then not the bike keels over without even bieng over the gravitational middle, graphics wise... and hitting tiny bumps at high speed can send you soaring through the air, spinning out of control.

I have found a glitch to send your score flying

go into a wheelie or nose wheelie or off a jump into the air and pause it, as long as you have it paused, the secound counter will continue rising even though it's paused

Actually all these biking games dissapoint me a lot. None of them has anything of the brilliant gameplay ElastoMania offers. Which strikes me as odd.

ONE button for the bike control!

if press the pause button while geting air, the playing pauses but the games is still counting the seconds of air your geting. thats how i ranked #1

this game is soooo easy level 1 you have to do nothing in 2 flip and glide on the bars and then 180 back to the ground it gts points in 3 its easy 4 all yopu have to do is get big speed to get over the first rock and five bounce against the walls 6 you can do major 360's! 7 is sooo hard you glo flying i have not mastered 8 though

how do you wall ride?

How do you do a wheelie?