When evil space pirates kidnap your brothers, it's always wise to go look for a hero. Getting one from another world is a major bonus, unless he's as apathetic as all get out. In Mr. Splibox, a platform puzzle game by Eyesteam, you play as this unmoved hero, who can't even be bothered to jump. That may raise some issues in a platform game, except the spliboxes have granted you the ability to spawn them underneath you at will, giving you the boost you need. Use them like a stepstool, or an improvised pole vault, or as flat out bait for the bad guys. Seriously these spliboxes will do anything for you, including falling onto spikes and letting themselves be launched across the screen. They don't care, they always seem to come back to you no matter how they 'pop'. They'll help you do anything as long as you get their captive brothers back to them or make your way through this wacky world to the teleporter. 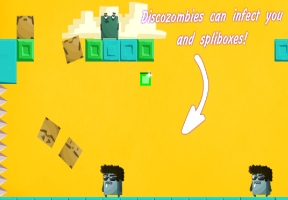 Mr. Splibox plays like a story thought up in some clever kid's mind. The intro in the beginning sounds like the sweet yet kind of rambling thoughts of a child and even the little spliboxes look like cardboard boxes someone drew on and the bright colors look as if they belong on a kid's show. It fits the zaniness of the world, with little mustachioed foes who charge head first at you, and the disco zombies, and even the cigar smoking suicide bombers are just the right amount of silly. Don't let the innocent feel lull you into thinking this will be an easy float down the river. A lot of the puzzles require you to be fast with your fingers. You'll need to put down boxes fast, or even make them vanish just as quickly. A lot of the levels could have used a check point, especially the later levels that are just a bit too long to have to restart it all the way over. This game has a bit of physics splashed in, though sometimes it is as wonky as the world is. Done by the same people who brought us The Sun For the Vampire, you can expect Mr. Splibox to have some frustrating levels (though not be the high difficulty the previous game was), but you know you're going to enjoy it all the way through. It's a clever and unique platformer that would be a shame to miss. Plus look at the spliboxes's adorable faces. How can you say no to that?

Great game! Nice design elements, pacing, challenge. Would like to see a sequel!