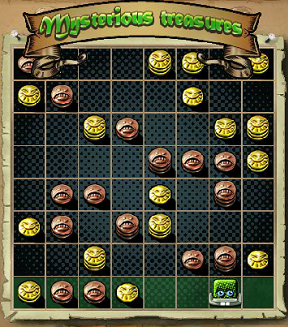 It's always fascinating when a developer, having come up with an engaging idea for a puzzle game, tries to justify the premise after the fact with a storyline. Case in point: Mysterious Treasures by Sky Mill. The ugly-cute comic book opening spins a twisted yarn of a lonely fisherman who pulls in a map to the Island of Treasure. The legendary pirate Green Beard once tried to loot the trove, not realizing the curse of the Red Ghost: that anyone who takes more cursed coins than happy coins would find their ship sunk and their bodies forever possessed by the ghost to serve as guardian of the treasure.

Got that? Okay, what it means is thus: The game is played on a grid littered with coins of both positive and negative value. Using the mouse, the player moves the marker chip along the horizontal axis to a box with one or more coins in it. These are then positively or negatively added to the player's score. The CPU then moves along the vertical axis to do the same. The game ends when all the coins are picked up or the player/CPU has no moves to make. The player must end with both a positive score and a score higher than the CPU. If not, the player loses a ship. Lose all five ships, and ye be cursed, matey.

Mysterious Treasures is quite the compelling game. It has the feel of the best kinds of strategic board games: rules simple enough to let players dive right in, but ones that ensure a skilled player can always triumph over the luck of the draw. The English translation of the text isn't 100%, which means players might have to play a couple rounds to fully understand the mechanics, but it's a small price to pay. Also, though it's a concept that cries out for it, there is sadly no two-player option, leaving the hit and miss CPU as your only opponent. Whatever flaws Mysterious Treasure may have, however, are outweighed by its strengths. It's a simple little game that makes for big fun.

Similar in concept to Riding Shotgun, also from the same developers, this version of the game is actually more simplified and casual. If you find it too easy or plain, give Riding Shotgun a try for more complexity in the gameplay department.

This is a classic game type. I don't remember the generic name of the game, but I used to play a version as a kid called "Maxit" and had to write my own for an artificial intelligence programming course.

Before I go on, let me say that the graphics are cute & I definitely enjoyed playing the game. Personally, I wish I had the skills to produce a game with nice graphics & audio.

I'd like to see something like Mysterious Treasures that does a little more with the underlying game. I think I'm just getting a little tired of seeing old game mechanics repackaged as new because they've simply been skinned. And no, I don't think the 5 lives aspect is really building on the concept much.

There was a recent game called Riding Shotgun that did more with this idea. It still felt like there was untapped potential, but the developer of that one put a lot more effort into the sound, art, gameplay, and story.

To me, this one feels more like a cheap clone, thrown together quickly.

[This game is by the same developer as Riding Shotgun. -Jay]

Ah, so it is. I guess that would make Riding Shotgun an upgrade to their own concept. It's a big improvement in every area. Mysterious Treasures probably came out first.

If I may make a suggestion, this sort of information might be good to put in the review blurb.

[I actually believe this game was created after Riding Shotgun, perhaps Big Fish Games wanted something a bit simpler and more casual? I've updated the review with a reference to Riding Shotgun. -Jay]

I just heard back from the developer about it. Here's what he said:

The first game was "Riding Shotgun". Then we took into account some of the comments and feedback from players. And we made a new game "Mysterious Treasures". Although the game is somewhat easier, but it is more balanced. The game is more suitable for an audience of facebook and bigfishgames.