Everyone gets junkmail. Coupons we'll never use, offers for bank loans we don't need, scams that are pathetically easy to see through... but today you've received a very different sort of letter. One mailed decades ago, begging for your help, and warning you against great danger. Mystery of Mortlake Mansion is a stunning new hidden-object adventure game that takes you on a journey full of talking beasts and shadowy places, and friends and foes... it's telling them apart that's difficult. Combining magic and mystery, this is a game that will appeal to fans of Dream Chronicles, or even anyone looking for a good story and some fun gameplay. 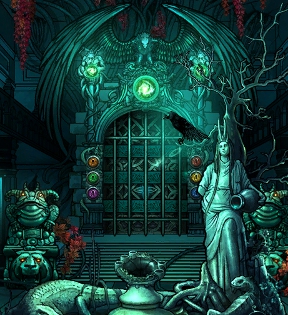 Upon receiving this letter from the past, you decide you're intrigued enough to investigate. Thoughtfully, the game allows you to decide whether your character is male or female, and the spoken dialogue changes accordingly. Whatever your gender, you'll soon find yourself at a deceptively run-down looking manor in search of the mysterious "R", who sent you the letter and claimed to need your help. It isn't long before you find yourself embroiled in a very dangerous battle whether you like it or not, and you'll have to do your part if you ever want to get home.

Part hidden-object, part old fashioned adventure, to solve the Mystery of Mortlake Mansion you'll need to scour both sides of the strange old building, solving puzzles and gathering items both ordinary and magical. Keep an eye out for a changing cursor that marks something you can interact with, as well as any glimmering areas that mark puzzles or hidden-object scenes. (Keep in mind that it seems like the game's terminology is British, so "football", for example, is more likely to mean "soccer ball" than the American pigskin.) While you usually won't be given much instruction for any puzzles you find, a little experimentation will go a long way, and you always have the option to skip particularly difficult ones if you wait a few minutes. Likewise, you also have a hint button to guide you in the right direction that only takes a handful of seconds to recharge. The map you gain access to will also show you areas that have uncompleted tasks in them, and allow you to instantly hop to any place you've already been. Handy! 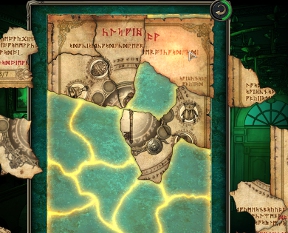 Analysis: Games these days are very pretty. With how graphics have advanced (and continue to advance every year) that's almost a given; you no longer get any points for that. I bring this up because Mystery of Mortlake Mansion is gorgeous, but I made a mistake in assuming that's all it would be. The game is visually stunning, with hand-drawn artwork and the sort of rich colour palette that's a welcome treat in today's realm of computer generated visuals. It strikes a fine balance between creepy and mystical as you wander back and forth between the two realms that the mansion occupies, so that exploring never feels stale as you keep uncovering hidden mechanisms or new spells.

But Mortlake is more than just a pretty face. It took a while for me to really become invested in the story, since talking birds and Grim Reaper robes aren't as impressive as they used to be, but before long I found myself genuinely interested in the story you piece together through journal entries and other clues you stumble across. There are so many hidden mechanisms and puzzles and minigames on offer that you're never just wandering around without an objective, making this the rare sort of game that engages you constantly. 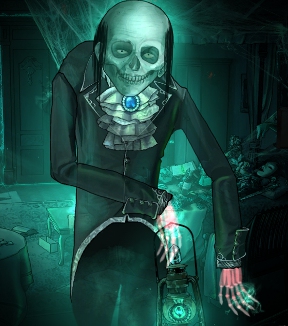 It's just unfortunate that it occasionally feels as though the game is more concerned with presentation than clean gameplay. There are a lot of little flourishes, such as the "victory" shower of symbols for puzzle completion, certain area transitions, or the map that pops up every single time you change areas, that look nice, but don't really add anything to the experience, and after a while they actually became a little annoying to me when I was seeing them every ten seconds and some of them actually hold up the gameplay to play out. The option to turn off the voice acting would also have been welcome; since the game always offers subtitles, you wouldn't miss anything, and to be frank not everyone delivers the a great performance. (Fortunately you can click through text as it pops up.) The end result is a game that's visually stunning, but winds up feeling a little cumbersome.

The gameplay itself isn't actually that difficult. While you may have some issues spotting items in hidden-object scenes initially, once you get used to the distinctive artistic style you'll probably fly through them and most of the challenges the game tries to offer. It decidedly feels like a more casual experience, something for you to sink into and easily enjoy without hitting any brickwalls or getting frustrated. Mystery of Mortlake Mansion is an absolutely beautiful game that's easily enjoyed by just about anyone. It's a solid adventure game that manages to perfectly capture that otherworldly spirit and atmosphere, and any aspiring magicians should definitely check out the demo.

I have to agree - Mortlake Mansion is a visually stunning game. Beautiful! Never once got bored, loved the whole thing. I highly recommend.

Help! I am stuck! I need to recharge the crystal, I have the machine built on the stove. I don't have any ingredients to put in it. There is supposed to be a bucket to fill with water in the greenhouse, but I can't find it. Found the fountain, but no bucket? Thank you in advance.

There's a bucket in the kitchen.

I love this game! downloaded it last night, I went to the shadowy study and completed the minig game: got the manual, and the big key.

Used the big key and some how along the line lost the manual!! I have all the parts for the machine to charge the crystal, I lit the fire and the parts are on the stove...but with out the manual it will not allow me to do anything! I do not know how to recover the manual and I have gone back to the shadowy study to see if there is another way to retain the manual again....with out luck. Please help! I am pretty sure I know where the crystal goes after I charge it, but I have no way to charge it if I can not recover the manual again. I don't know what happened, unless I used it some where else in the game and do not remember...Please tell me there is another way to get this crystal charged without having the manual, since my manual has come and gone :( I tried moving the parts around with out it...the game just keeps saying you need manual. Thanks! :)

2,472 Views
2 Comments
chrpa— Jayisgames needs your help to continue providing quality content. Click for details Welcome to Mobile Monday! Let's visit Nicolet's village again - one of its inhabitants decided to make a nice time with a book and needs your help....  ...

4,640 Views
0 Comments
chrpa— Jayisgames needs your help to continue providing quality content. Click for details Welcome to the Roundup 54 - Retro with four games! After you catch the ten monkeys in the chapter, look in the inventory. You will find a...  ...

How to Develop a Game on Linux

Views
0 Comments
jayisgames.com— Building a game is one of the software developer's most refined skills. The right tools, however, play a massive role in how successful such a person will be. Due to its vast prospects and benefits, Linux is gradually becoming a...  ...