Based on an H.P. Lovecraft story, Mystery Stories: Mountains of Madness is a casual adventure game set in the snowy hills of Antarctica. As if pulling a tale from Lovecraft wasn't interesting enough, the team at Cerasus Media went on to create an adventure game fused with intricate puzzles and alluring locations that beg your cursor to go searching for every item and every object it can click on. It's a quietly impressive game that walks a different path than most casual adventure/hidden object games, making it a fantastic experience from beginning to end! 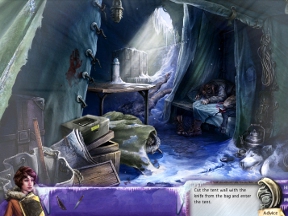 In 1931, an Antarctic expedition somehow went awry and a team of scientists disappeared. Two researchers immediately fly in to investigate. What they discover chills them more than the frigid air. Beyond a hidden range of mountains taller than the Himalayas, strange creatures have evolved that seem to be neither plant nor animal in nature, and their remains indicate they are much older than life on Earth. Mentioned in the Necronomicon, these "Elder Things" left more than a few riddles behind, and as Lynn Morgan and William Dyer from Miskatonic University, it's your job to track down any surviving members of the first team and explore the mystery behind these unique beings.

Mountains of Madness takes places in short chapters that are comprised of half a dozen or more different scenes to investigate. Search each area with your mouse, clicking on interesting things and picking up any objects you may come across. Completing tasks usually requires more than one step, and getting the inventory items you need to solve puzzles might involve a mini-game or a good old fashioned hidden object scene. Not too many, mind you, as Mystery Stories is quite sure of its status as a casual adventure game!

Two very nice gameplay additions in Mystery Stories include scrolling scenes and controlling multiple characters. In a few areas, you can click the "enable scrolling" button at the top of the screen to turn everything before you into a moving panorama. It's not necessary to use this to complete levels, but it adds a nice visual kick and makes the game's world seem so much bigger. Also, a few chapters in, you'll get to enlist William Dyer's assistance as you switch between main characters, solving puzzles and leaving items for one person so both can make it through safely. A very nice touch that turns the often lonely solo adventure/hidden object experience into a team-oriented one. 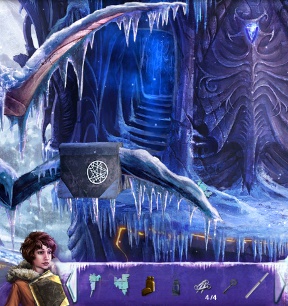 Analysis: As with any Lovecraft story, you know the best bits are always just around the corner. The plot in Mystery Stories follows the original book fairly well, but having this world brought to life through visuals and interactive puzzles makes it a pleasantly new experience, even for Lovecraft fans. And as far as the gameplay goes, even seasoned hidden object and adventure fans will find something fresh and organic in Mystery Stories!

The hint system is extraordinarily well-done in Mountains of Madness, and each time your eyes flick towards it you'll smile and be happy it's there. Click the little advice box to get a vague tip on what you need to do next. Click it again for a more specific tip. And, if that fails, click the hint button to have the next move pointed out to you. It works like a charm every time, and since Mystery Stories doesn't hold your hand beyond this hint system, having it there as an option is a smart design move that allows you to customize the game's difficulty on-the-fly.

There are no real flaws in Mystery Stories: Mountains of Madness, it's a game that keeps everything simple and allows you to sit back and enjoy a great story with great gameplay. Hidden object scenes are sparse and relatively easy to complete, sparklies are rare, even in casual mode, and the small gameplay gimmicks are a welcome break from standard adventure game fare. There are five chapters to complete, each taking an average of 30 minutes, so the overall length is around three hours. Afterwards, of course, you'll want to go grab H.P. Lovecraft's At the Mountains of Madness and give it a good read!

Because Mystery Stories: Mountains of Madness was released the very day after Drawn: Trail of Shadows, it was easy to overlook this gem of a game. It's a shame, too, because it's got a good story and gameplay that's just outside of the ordinary. Mystery Stories needs to be played, and it's the perfect experience for anyone who's tired of the hum-drum standard of hidden object and casual adventure games out there. Visual, playable Lovecraft is never a bad thing!

I think this game might have one of the best soundtracks I've ever heard in a casual game.

Yeah, the music was very good! Subtle, but it sets the mood perfectly.

I'm playing on my iPad, and I'm at the screen with the necronomicon where I've ripped out the page after putting it together. Now I'm stuck on the screen with the book and can't exit it, I've tried everything like going to menus and stuff but it always brings me stuck in the book screen. I found one red gem and entered the screen and now I'm stuck. Anyone know how to get out of this screen?

Heather - I have exactly the same problem. I can't get out of the book!