Two feuding Louisiana towns. A mysterious mythical owl man. Creepy swamps. A missing boy. Crocodiles. All in a days work if you're a Mystery Tracker detective. When sightings of the local legend are at a peak and young boy goes missing, the townsfolk don't know what to believe. Piece together clues, question suspects, and find the link between things in Mystery Trackers: Nightsville Horror, a hidden-object adventure from Elephant Games. Use your sleuthing, your brave little dog Elf, and your puzzle solving skills to track down the missing boy Oliver before it's too late. 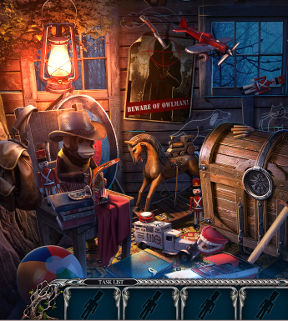 The control scheme is the same as you usually see in this genre, with plenty of inventory puzzles. Just keep in mind that objects in you pick up that can be combined with something or otherwise be further manipulated will have a plus sign next to them. There are a couple of new mechanics introduced in this game. Upon arrival a mystical blind man bestows upon you the gift of sight then disappears on the wind without an explanation. I mean who does that? Might as well put your new skill to use. Click the button on the right side of the inventory bar to enter this mode, allowing you to see the scene before you in a different light. Move the glowing objects back to their original positions and you will be rewarded with a playback of a scene from the past. The gift of sight is very useful for piecing together the mystery (though you're no Erica Reed), but the strange visions can also have you questioning your sanity. While this doesn't significantly change the gameplay, it does add to the narrative and helps the game stand out from the crowd. The second new thing is the (sort-of-but-not-really) interactive dialog choices. While I appreciate this is trying to do something different for the genre and perhaps push it more into the realm of traditional adventure games, it falls short of making a positive impact on the game. You'd think, as a fully fledged Mystery Tracker, you'd be able to at the very least react with a full sentence instead of just uttering "Owlman?" to the person you're questioning.

As is to be expected from the series, the voice acting and visuals are a treat. While The hidden object scenes are beautiful and varied, the puzzles are a bit lacking. There's not a great variety and they're not really challenging. Here, at least in this case, the puzzles fall behind compared to Mystery Case Files games. Nightsville Horror has you focus on just one suspect at a time, which is nice for clarity's sake and also means there's not a lot of backtracking. But when you do have to travel further, the interactive map and hint button are good for jumping around, or just for getting a reminder as to where you saw that latest chest that needed the sigil you just found. As you travel about, be on the lookout for some of the various collectibles hanging around. There's morphing objects, statues, and coins laying about, which can be viewed or used from menus available on the map screen. If you're looking for a game with challenging puzzles, then you might want to pass on this one. However, if you'd like a fun story line with a good dosage of hidden object on the side, you'll want to check this one out.

Being from a landlocked state myself, they all look the same to me (though of course I intellectually know there is a difference.)

I don't think it specifically says crocs, and I can change the review if you like. :)

It's not a big deal, really, though I appreciate the offer. I just sort of sigh and shake my when game developers don't take the time to get to know the locations in which they set their games (when they're real locations, that is). Thanks for offering to change it, but no need to worry about it. :)