Admittedly given my choice of supernatural mystery solving teams to join it'd be a hard decision between the Ghost Facers or the Scoobies, but being a Mystery Trackers detective sounds pretty sweet too. In Mystery Trackers: Silent Hollow, the latest installment in Elephant Games' fantastic hidden-object adventure game series, you're called back to headquarters only to discover both it and the entire surrounding town are under attack, and your fellow agents appear to be afflicted with some sort of paranormal mind control. You'll need to explore, gather items, and solve puzzles if you want to get to the bottom of things, but with your trusty sidekick Elf, a handy map that allows you to travel and spot objectives, and some super powers of your own, you seem ready for anything. Which is a good thing, since a terrifying foe from the agency's past is going to throw everything in your path, and even turn your friends against you. 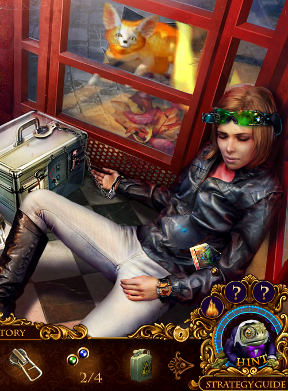 While a lot of people may prefer the more serious, dedicated approach to storytelling taken in the wonderful Mystery Case Files games, for my money, I'll take the gleeful, wildly creative and entertaining stuff you find in every Mystery Trackers game any day. Silent Hollow is, in a lot of ways, even more over-the-top than its predecessors, though in mostly good ways. It makes it look like being a Mystery Tracker is basically like being James Bond, Harry Potter, Indiana Jones, Buffy, and Myka Bering all at once... complete with your own Hogwarts Express. Heck, they even throw in some Bioshock/Galerians-y abilities via a magical syringe gun while they're at it. Although voice acting is largely fairly well done, it's sort of unintentionally hilarious combined with the way the characters stare at you without moving their mouths, especially considering it's fairly clear many performances involving more than one actor were filmed separately so reactions sometimes don't fit or are off timing. The complete absence of music most of the time is also a weird choice, which makes it all the more jarring when it does kick in.

While Silent Hollow's gameplay doesn't really deviate from the "find this, use it there" formula, it keeps things from feeling stale by wrapping all of it in imaginative settings. It isn't exactly what you call difficult, regardless of the setting you choose at the beginning, so chances are you'll fly through the game... especially given that actual puzzles are both on the simple side most of the time and relatively few and far between. Adding extras like Agent and Pet dossiers is a clever touch of world building, as is the story of the agency's founding, told through a little interactive puzzle sequence. Though the gameplay isn't anything new or even challenging enough to hold you back, Mystery Trackers: Silent Hollow earns a solid recommendation for its sheer enthusiasm, style, and charm that make it stand out head and shoulders above the lion's share of cookie cutter, unimaginative hidden-object adventures, and something you'll enjoy every step of the way.