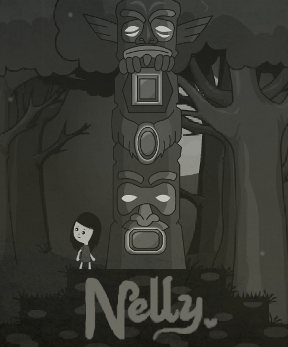 Black Square Studio's lovely but unsettling little platforming puzzle adventure game Nelly may look sweet and unassuming, but if you've spent any time around indie games at all in the last several years you should know to approach any title featuring an adorable child as a protagonist with the grim knowledge that things are about to get all dark and meaningful and depressing and whatnot. It's a law or something... but maybe this time will be different. Little Nelly can't sleep one night, and when she ends up following a glowing butterfly into the woods outside her house one night, she ends up stumbling into a whole other world. There, she finds that not every fairytale has a happy ending, and the forest has teeth. And spikes. And claws. And crushing blocks. Gretel would probably tell Nelly, "I know that feel, bro".

Use the [arrow] keys to move, the [spacebar] to interact, and the appropriate letter key (such as [A] or [S]) to trigger your special abilities as they become available. A single hit from an environmental hazard or particularly munchy forest beast will take Nelly out, but since the game is so liberal with its checkpoints you likely won't encounter any huge setbacks even if you do bite the dust. Which, like as not, will be more due to mistiming a jump. The environments are gorgeous, with the perfectly chosen soundtrack only adding to the fairy-tale-gone-wrong atmosphere, and it feels like it all lasts just long enough for you to give a satisfied sigh of completion when you're done. It's a little weird with its mildly inconsistent tone of d'awwww to WAUGH, but it's also a little lovely, and well worth the ten minutes or so it'll take you to see Nelly through the thick of it.

I'm having a problem in Chapter 6.

I have the lever for the locked door, but I don't know what to do with the buttons.

Love the artwork, love the puzzles, hate the sloppy controls and bad jumping. Got to the stage where Nelly is in the treetops, but an arboreal badger grabbed her and just kept gnawing and gnawing and gnawing without the scene resetting. Three stars, I guess?

I like the Limbo-ish atmosphere and cute graphics but the controls, ugh, the controls... it's unbearable.

Got stuck on level #6 and then took quite some time to final puzzle, but I still enjoyed it.

End puzzle became TERRIBLE when I didn't realise that

you also can hang on flying object with space, not just push pull.

Resorted to adjusting walking speed on the metal crate to the differently paced magnet. It made for several annoying retries. (physically illogical, although it wasn't meant as gameplay I guess)

Also a repeatable bug (can't repeat it now though), player(game) got stuck

when I got attacked by the "bear" in the tree (lev 6). Thankfully there was bookmarks.

Possible bug report, I only did this once and didn't try to replicate. In level 6, I pulled the lever to drop a box and then hit the "a" key to reveal the branch below it. The box dropped, but I had no more arrow controls to move the character, I had to go back to the book and start the chapter over.

Has anyone figured out the 4th from the end achievement?
I think it will be found in level 5, going by what I've seen in the walkthrough...
[The walkthrough has been edited to include all of the achievements, try refreshing the page to see the recent addition. - Trinn]

I really liked this creepy, macabre game, but I could not finish it. Alas, I am terrible at platforms! I got utterly and irrevocably stuck on stage 6 with the

mole creature (those are FREAKY LOOKING, eith their odd pivoting heads!) where you have to jump over him and over to the mushroom

. After wasting about ten minutes on that particular part, I decided to quit. I also found the soundtrack extraordinarily grating on my nerves; this from a music-lover! Overall, this game would be alright if not for the ill-conceived controls. Dora, and all other JIG reviewers, please, please, PLEASE don't say that a game will take only ten minutes. Thirty minutes after reading that I sit here, writing this... just a thought!

Were you trying to jump over it at ground level? If so, it would have been impossible. The key is to stand on the ledge above the enemy, wait for it to approach the wall and then jump down and over him. At that point, it's much more about timing than distance.

Nice game, excellent puzzles, a bit buggy in places and with dodgy controls. And did anyone else quit, restart and not notice the chapter tabs, so they started again from the beginning? Opening the book to the most recent chapter, rather than the first one, might have been a good idea...

Found the same bug described above with the branch and box.

A sweet quirky cupcake of a game. A little weird and heres my theory:

in the beginning she has a troubled relationship with her father and is lonley etc. But at the adventures end its backwards in that she and her father are now very close. of course it could be that she goes on an adventure and is now back home. i dunno.

That's an interesting thought, Blinky. My interpretation was that

Nelly has a close relationship with her father, but because they are so poor and live out alone in the forest with no toys or friends, she becomes very lonely.

After being lured into the woods by the beautiful butterfly, she finds a fairy tale world where she can have all the adventures she dreamed of.

I found several parallels in the story to Lewis Caroll's Alice in Wonderland, as the little girl follows a mysterious white animal into the forest and falls down a hole into a strange fantasy land. Her escape through the mirror is also a possible reference to Carroll's sequel Through the Looking Glass.

As for her return home, I saw it as a joyous reunion between a lost girl and her worried father.

Now that you mention that Trinn It makes a whole lot more sense.

I too sensed the similarities between the game and Alice's adventures and you just brought it to light. Thank you.

Mood is really where this game Excels. Everything fits together: the colors, styles, music, sound effects.

Am I the only one who thinks "Nelly" looks an awful lot like Young!Marceline? Like, freaking exactly? the only difference is the dress.

5,323 Views
1 Comment
jayisgames.com— Most people who have encountered computer games have either a negative or a positive opinion about this pastime. For many years, disputes between opponents and supporters of computer games have not subsided, and they have the most diverse arguments....  ...

7,660 Views
4 Comments
chrpa— Jayisgames needs your help to continue providing quality content. Click for details Mobile users may already know Snapbreak's puzzle games, Doors: Paradox and its predecessors are available for some time on both leading platforms. Pc users now can try the...  ...

6,348 Views
0 Comments
chrpa— Jayisgames needs your help to continue providing quality content. Click for details Welcome to the Roundup 42 with three games! As mentioned in the previous roundups, only odd-numbered episodes are featured since even-numbered are for Robin Vencel's patrons. More...  ...

How to create the ultimate PC gaming setup

3,426 Views
0 Comments
jayisgames.com— While video game consoles have dominated the gaming market for a long time, PC gaming has enjoyed a resurgence in recent years....  ...