Once upon a time there was a little boy named Peet who slept peacefully in a coma. When he opened his eyes, he found himself in a nightmare.

Upon waking, Peet's best friend was nowhere to be found. It is now up to Peet to investigate the screams coming from the heart of Neverwood; the increasingly bizarre behavior of the zombie grownups; and the strange truth about his own past in this haunting, otherworldly fable.

Neversong is the third rendition of a game concept that began as a much tinier and more ethereal seedling. Coma, the brainchild of Thomas Brush, was first launched in 2010 and became highly popular amongst indie gamers. Brush then began collaborating with Erik Coburn of small game developer Serenity Forge to start creating the derivative Once Upon a Coma. A well-received demo was launched in 2018, along with a fundraiser to finish the game, which proved successful. And finally, after a name change, we now have the highly anticipated end product.

Neversong presents layered experiences for many players. The very theme of the game elicits feelings of nostalgia, while for those who have played Coma and Once Upon a Coma Part 1, we revisit many characters, locations, and gameplay elements from renditions past (Hello, Red Wind Field!). We experience the same melancholy atmosphere; cheeky dialogue; and familiar backdrop elements from long ago, such as dreamlike music and graffiti on the walls. Dialogue between Peet and other characters provides a piece of the narrative with every interaction.

The Neversong universe has captured audiences for over a decade - despite its evolution - due to its compelling story. Themes of childhood wistfulness and rediscovering one's identity appear throughout the game. Neversong is all about the death of youthfulness and the redemption one can achieve after the loss of that innocence. It's about discovering who you really are, deep down--who you were when you were a kid. Evidently, Peet is more timid, less popular, and less confident than Wren, and at the core of his quest is the question of whether he can navigate a whole new world without her leadership. This coming-of-age story is one that resonates with nearly everybody.

Despite the familiarity of much of the game, developers did an impressive job reinventing elements to make them feel fresh and new. Players' first impression will be that this is a dark game that is much more grim than the Demo suggests. Neversong begins with a preamble, which helps players familiarize themselves with the controls, mechanics, and physics. It piques curiosity and conveys that this is a game of great fantasy and grand adventure; and concurrently, it's obvious things are about to get CREEPY.

The game is just as much about puzzles as it is about hard platforming, with emphasis on gaining new abilities as Peet moves along in his journey. One added feature is Peet having limited health in the form of five hearts. Although this feature introduces another dimension, it thankfully does not make the game overly challenging. There are plenty of opportunities to save progress and redeem lives, with relatively little penalty for incurring damage. Additionally, one may find some of Peet's skills and in-game mechanics to be quite novel.

Most of all, the differences reflected in Neversong are simply because the game is now much bigger. There's ten times - if not more - content to digest, meaning more story and characters, as well as complex sub-worlds. This expansion provides a greater range of ambiences, enriching the game's thematic effects. 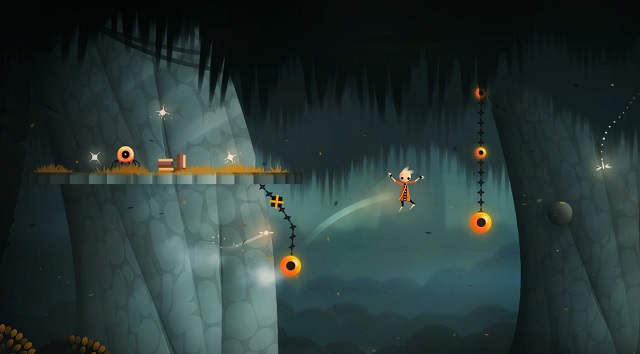 It's clear that Brush and Atmos Games worked synergistically with Serenity Forge to create a ready-for-market product. However, a few additional adjustments could further launch Neversong to legendary heights. The game starts off with abundant hints that propel players through initial phases, but about one-quarter of the way through, guidance drops off abruptly. There's logic in challenging players as a game advances, but the learning curve here is quite steep and may isolate some players who initially felt emboldened. The shift from the beginning of the game, which has more of an interactive art feel, to a more difficult platform style signifies a clear divide between the originally existing content and a more commercial (but still indie) development. The Coma Card element is charming but not well-integrated, and therefore it can feel somewhat distracting from the rest of the game. Lastly, game physics could also benefit from a spot of polishing, and some glitches make it a bit harder to play, though not impossible.

Whether coming in blind or already a loyal patron, players will agree that Neversong delivers something exceptional. It stylistically meshes the Uncanny Valley with fairytale quaintness, drawing similarities to Binding of Isaac and Tim Burton creations. Most importantly, Neversong exemplifies wonderful storytelling within a very special world, and players will enjoy being immersed in this newest rendition.