Nightmare Realm: In the End...

Ten years ago, thanks to her mother, Emily barely managed to escape the dark, mystical legacy looming over her, handed down by a father who wasn't what he seemed and a world that lurked just beyond the shadows. Unfortunately, even after Emily has graduated high school and stands ready to begin her own life, a realm she never understood or wanted to be a part of isn't willing to let her go, and her mother is running out of time. Lesta Games and Film delivers a visually stunning and immersive hidden-object adventure rich with dark fantasy and strong storytelling with Nightmare Realm: In the End..., a direct sequel to the original game. Is the sinister figure leading you deeper into the Dark City working for or against you? Who is the Curator, and how does he... or it... command the dark-cloaked extractors? More importantly... isn't "may actually be part of an ancient dark order of otherworldly beings" something you should disclose on the first date, right under "non-smoker" and "likes country music"? 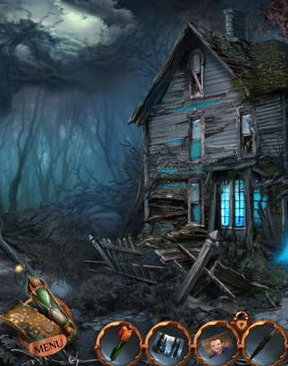 Early on in the game, Kathleen (Emily's mother and your in-game avatar) will have to venture beyond her idyllic suburban home into a dark world that acts as a gateway between minds and dreams. As it turns out, Emily and her family might not be the only ones in danger when Kathleen discovers out what's really going on when you're dreaming and realises she's going to have to go up against ancient forces to protect her family and perhaps the world. Sounds intimidating, huh? But, suddenly! MAGIC BOARD GAME! That's right, that is exactly what I meant to type. No, it's not Jumanji, so sadly Robin Williams won't be making an appearance. An old board game Kathleen discovers in a box of keepsakes appears to be trying to help guide her through the surreal world she suddenly finds herself stranded in, which is, you know, not quite as cool as a Sonic Screwdriver, but I guess you work with what you've got. In addition to providing more backstory as you collect origami figurines scattered about the game, it also provides a map that helpfully details where you should go next and where things are left undone. Click around to gather items, solve puzzles, and escape... unless you want your dreams to wind up being juiced too. 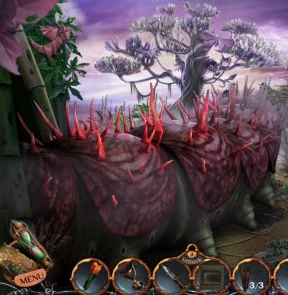 Analysis: The original Nightmare Realm was a rare game... gorgeous, focused on telling a story, rich in imagination, and genuinely creepy without ever resorting to cheap scare tactics or gore. And, surprise surprise, this sequel is even better. It delves more deeply into the lore the first game only gave us glimpses into, providing a fantastically designed fantasy adventure that's full of unique beasts and characters. Which is a good thing, because it really is the sort of concept that was screaming for more exploration even if there is so much going on it gets a bit muddled in places. While the animation of the characters actually winds up becoming somewhat... unsettling in places due to awkward proportions and a weird overlay of live actions at times, the rest of the game is an absolute knockout. Environment design is beautiful, surreal and otherworldly, with colour-rich artwork and fascinating creatures. And gross stuff. Am I the only one that thinks caterpillars stop being cute right around the time their squishy little bodies become gargantuan, mile-long nightmares of spines and flesh?

Nightmare Realm: In the End... is a surprisingly long game that leans fairly hard on the adventure side of gameplay, with a focus on traveling around and solving puzzles. While this does mean you'll do a lot of backtracking, it also means there's a greater emphasis on story-telling and world-building being integrated into the gameplay as a whole. The hidden-object scenes, however, wind up feeling so clearly tacked on to a game that wants to be a pure adventure title that they both fail to engage and somehow look shoddier than the rest of the game itself, so it's good they pop up so rarely. In a way, the actual gameplay winds up not being quite as engaging as the story and setting itself simply because the gameplay is so standard. It's fun and beautifully presented, but it's also not particularly creative. With its incredible visual design and engaging story and atmosphere, however, Nightmare Realm: In the End... delivers a fantastic adventure that fans of dark fantasy will want to check out immediately.

I'm stuck :( If anyone could help I'm in the

Second painting on the floating island/tree thing. It keeps telling me to load the arbalest with the grappling hook, but I've clicked a gazillion time and it's still not loading it.

FYI, the windows 'full version' link is broken...will be getting this ASAP! Looks great!