Nightmares from the Deep:
The Cursed Heart

There was a day when the mention of pirates didn't immediately connote Johnny Depp in dreadlocks and eyeliner; it actually brought goose bumps along the spine and many a salty utterance amongst lawful sailors. Then, the pirates of the Caribbean were to be feared and hated, not queued up for in hours-long lines at a theme park near you. The tales of murder and mayhem along the high seas always titillated and intrigued, nevertheless, which is just what you can expect from Artifex Mundi's spectacular thriller, Nightmares from the Deep: The Cursed Heart. 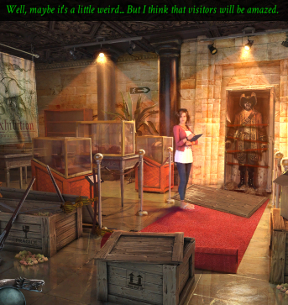 You begin this adventure hybrid game as the director of a well-appointed nautical museum buzzing with excitement over its newest exhibit: the mummified remains of the notorious 18th century blackguard, Captain Remington. In a twist of the supernatural, you soon find yourself aboard his ship, bargaining with skeletons for a map and listening, enthralled, to an undead dwarf's recounts of an unlikely romance.

Navigate by following your cursor—it will change to indicate new paths and interactive areas. Nightmares from the Deep: The Cursed Heart does a top notch job of explaining all this when you first begin; an optional tutorial is offered to those new to the genre while those who want absolutely no "hand holding" can select expert mode which stiffly penalizes mis-clicks while eschewing the glimmering active areas and a quick-filling hint/skip timer of regular mode. In both modes, a number of convenient implements make playing frictionless, so you can focus all your attention on plot and puzzle rather than mechanical issues. These include a journal to record clues and story development, a bottom loading inventory keeping tools near-at-hand, and a smart map that helps you stay oriented. In regular mode, the map will also display where to find interactive areas. 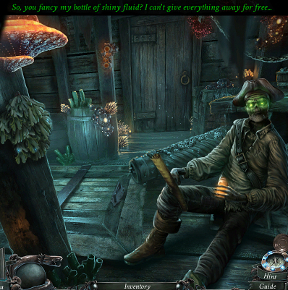 Gameplay is a bountiful blend of exploration, mini-games, and a choice between hidden object searches or mahjong solitaire. Aye, a perfectly piratical game of mahjong! When entering a hidden object search scene, choose mahjong instead if that's what suits your tastes. Then, you won't be searching for twelve objects to earn the coveted prize, you'll be matching pairs of symbols until all tiles are gone. What this means is you can finish the entire game and never once bother with traditional hidden object scenes. Well, a few miniature search scenes pop up; in these you must find a few parts to assemble a whole item. Yet you won't be bombarded by extraneous hidden object searches, mahjong or minigames. The focus is on adventuring and unwrapping layers of stories, both of Captain Remington's life and love as well as your quest to rescue your daughter.

Analysis: Artifex Mundi, known for hidden object adventures brimming with atmosphere and in depth story development, such as Enigmatis: The Ghosts of Maple Creek, has reeled in a treasure trove of all things good in Nightmares from the Deep: The Cursed Heart. Every scene exudes high-quality production values along with the talented art and craft of storytelling. Many of the visuals are so distinctly rendered and layered in dimension, it looks as if you could reach a hand out and actually feel the smooth wood paneling or squishiness of a sea sponge. The plot is a mixed bag, though. The cursed pirates scenario is nothing new and holds no real surprises and, although the narration tries to steer you in that direction, it's hard to sympathize with Remington's plight; he's no innocent victim here! Nonetheless, the way it's done will keep you just as enthralled as if you've never seen a pirate in your life. 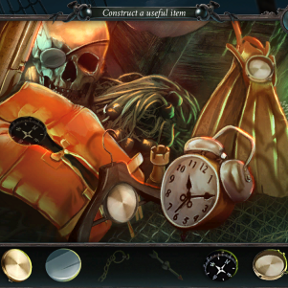 Besides a fantastic presentation, Nightmares from the Deep: The Cursed Heart comes as close as possible to the best of all worlds, something to satisfy everyone. As shown by the inclusion of a match-3 option in their Time Mysteries: The Ancient Spectres, Artifex Mundi understands not all players are enamored by the great search. Similarly, the choice between mahjong or completing a list of hidden items in Nightmares from the Deep: The Cursed Heart is beatific news to those who have tired of conventional hidden object adventure games. Search scenes are standard fare but they are improved by gorgeous graphics, orderly composition and the addition of fragmented items. You'll run into the typical array of minigames yet they're redeemed by how well the puzzles merge with the story and theme, so you are never pulled out of the moment, which is good because the excitement and urgency continually build depth into the experience. With so much going on, this results in a longer than average length of play.

It is truly an experience to play Nightmares from the Deep: The Cursed Heart. It's likely you'll be so impressed by the ambitious production values that nothing seems ordinary, not even the oft-used story. It's one of those games that's better seen than read about. Take a dip into the demo and you'll know what I mean; it's less a nightmare and more an adventurer's dream.

Nightmares from the Deep: The Cursed Heart Walkthrough
Chapters 4-5

Nightmares from the Deep: The Cursed Heart Walkthrough
Chapters 4-5