Apparently, being a ninja isn't all it's cracked up to be. Long night shifts, no social security, and all the sneaking around gets really tiresome. It's no wonder that ninjas want to change their career after a while. And although mining doesn't seem like the obvious choice, our little protagonist seemed quite happy with it in Ninja Miner. Now we meet him again in Ninja Miner 2, the new platform puzzler from SilenGames, still as busy as ever. His job is to collect gems and stars, then advance to the next stage, and you can move him with the mouse or the [arrow] keys. Ninja Miner 2 uses the same basic mechanics and level design as its predecessor, meaning that the ninja moves in one direction as long as he doesn't hit an obstacle. Obstacles are numerous and diverse in maze-like levels, from walls to spikes to Halloween-themed enemies. 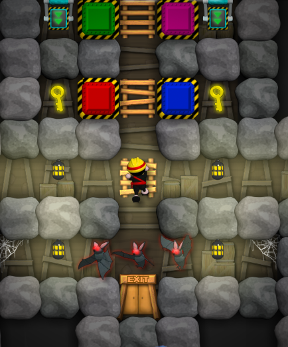 Luckily, this time around you have three lives per level, so one encounter with a rather unpleasant cave bat won't undo all your hard work. Another life-threatening addition is water, which covers parts of some stages; you can control it by pressing switches or swim through if you find a snorkel. The exit door opens when you've collected all the gems, though you can also collect the three stars or try to beat the additional challenges, which definitely contribute to the replay value. Ninja Miner 2 has managed to keep the playful arcade spirit of the first installment while introducing more demanding puzzles and more elaborate levels. It's a delightfully entertaining firecracker of a game, and this sequel hasn't nearly exhausted all the gameplay possibilities, so we could hope for another episode somewhere down the line. After all, the little ninja seems perfectly happy being a miner and certainly wouldn't mind coming back for more.

Good puzzles and enjoyable with a few quibbles: no option to zoom out to see the whole level makes for a lot of otherwise unnecessary re-do's; the levels are all fairly easy to complete, but this is a bit tapered by the "quests" (challenges); the quest on level 30 seems impossible (80 move limit), or maybe it's just me (that can't be it, can it? |+}).
Nice little diversion, overall.

I can't get it to load in both firefox and chrome (adblocker isn't active in jig.com)

Loved the original Ninja Miner but not so much this 'sequel' because there's no zoom option. Hard to tell if all the points have been scored and often cannot see 'enemies' so avoiding them is pure chance, not skill.

Thanks for the walkthrough and the awards list! I love the series too and can't wait to review the next one :)

3,207 Views
0 Comments
chrpa— Jayisgames needs your help to continue providing quality content. Click for details Welcome to the Roundup 49 with three games! As mentioned in the previous roundups, only odd-numbered episodes are featured since even-numbered are for Robin Vencel's patrons. More...  ...

Views
0 Comments
jayisgames.com— In the past, mobile games were mainly for entertainment purposes. They did not have any educational value and were not able to help students learn. Today, however, several companies have developed augmented educational phone games that can assist people learn...  ...

2,101 Views
3 Comments
chrpa— Jayisgames needs your help to continue providing quality content. Click for details Hi! Weekday Escape and Weekday Puzzle are here! As every second week, we've got a new tomoLaSiDo with rather tough puzzles followed by a short point'n'click game...  ...

1,213 Views
0 Comments
chrpa— Jayisgames needs your help to continue providing quality content. Click for details Welcome to Mobile Monday! We start with Nicolet's game and again you end up in a small house and can't leave until you help its inhabitants. Then...  ...