How many mines would a ninja mine if a ninja could mine mines? Er, on second thought, this would work better with a mime. But could a mime fly from one wall to another, collecting diamonds and stars, avoiding spikes and crushing obstacles in the blink of an eye? Not very likely. Ninja Miner by SilenGames is a quick-fire arcade game with a puzzly disposition. Your goal is to pick up all the diamonds in the level, at which point you can keep playing (in order to get the three stars as well) or exit through the same door you entered from. To do this, either use the mouse or the [arrow] keys. There are twenty-four levels, each with a different size and layout and lots of added object to help/hinder your progress. Some might include portals, or tools you have to use to break crates, or coloured blocks controlled by levers. 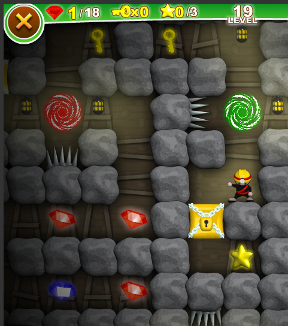 All this seems easy enough at the start; however, our little ninja is so overexcited by the joys of being a miner that he'll zoom through a tunnel as long as his little feet will carry him. In other words, once he starts running along a straight line, there's no stopping him, so you'll have to carefully calculate your route if you want to clear a level. Add to that a good number of spikes on the walls (some of which you don't even see until the ninja runs into them), and you've got yourself a nice little conundrum. This is not to say that the game is frustratingly difficult – the solutions might be obscure when you play some levels for the first time, but it's so much fun that you really don't mind trying again, and again if needed. The 3D graphics work well with this type of game and the vibrant colours contribute to the pleasant environment. And for those who like an extra challenge, there are 65 achievements to reach.

With its fast pace and bouncing off the walls, Ninja Miner has an almost pinball feel to it. You'll have to think on the fly, react quickly and keep your eyes open at all times, and you'll have a lot of old-school fun doing it.

anyone knows all the secret awards?
I only know the following:

Neat game :) The last level frustrated me quite a bit though! you have to do lots of leaps of faith until you memorize everything. But that's the only level that made me frustrated, the rest was just challenging and fun.

1. Complete final level in under 2 minutes.

i'm stuck on level 17. to many switches i'm so confused.

All Secret Awards, thank you to those who posted some of these earlier.

There is no walkthough to watch. Secret Award number 9 is:

In case anyone is having trouble completing the last level for the secret medal:

You can pause if needed (press P) and it won't count against the time.

4,506 Views
1 Comment
chrpa— Jayisgames needs your help to continue providing quality content. Click for details Welcome to the Roundup 37 with three games! As mentioned in the previous roundups, only odd-numbered episodes are featured since even-numbered are for Robin Vencel's patrons. More...  ...

2,309 Views
0 Comments
chrpa— Jayisgames needs your help to continue providing quality content. Click for details Welcome to Weekday Puzzle! Jani Nykänen's pixel puzzler is fun - it's Pacman-like game with blobs. In pancelor's puzzlescript puzzler you need to get boxes on their...  ...

4,041 Views
17 Comments
chrpa— Jayisgames needs your help to continue providing quality content. Click for details Hi, the newest Weekday Escape is here! At the beginning you are supposed to escape from two U.S. states with Selfdefiant, and then you find yourself in...  ...