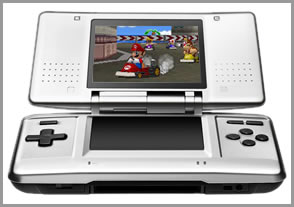 Early this morning, Nintendo took the wraps off the final design for their new dual-screen handheld slated for a November 2004 release in the US and Japan. The name for the device was also finalized as the Nintendo DS since the name "evokes the idea of a portable system with dual screens."

I am excited about the new design, as I thought the one Nintendo showed at this year's E3 seemed plain and underwhelming for such an innovative game system. As well, I am also looking forward to the new ideas and interfaces the device will facilitate, as I discussed back in May. Click.