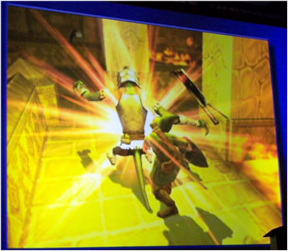 Satoru Iwata delivered his Game Developers Conference 2005 keynote address this morning and spoke about his experiences as a gamer and as a game developer. He talked of some of the highlights in his career with HAL Laboratories where he began his illustrious career with Nintendo, beginning with NES Pinball, and progressing through the Mother 1 & 2 series, Kirby, and Super Smash Bros. He then rewarded the audience with exclusive, never before seen footage of the latest build of the next Zelda game coming to Gamecube.

Iwata-san pitched Nintendo's software standards by a rule of I's, a rule that Nintendo strives to address with all of its games: 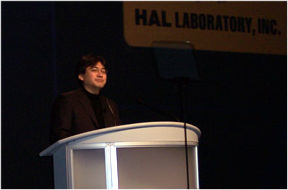 He also spoke of other present developments promising a free Wi-Fi service for the Nintendo DS to be launched later this year. Also, with the upcoming release of Mario Kart for Nintendo DS, he even called several people up on stage to demonstrate the latest build of the game. What I found interesting was that everyone was driving their karts using just the D-pad and the A & B buttons of the DS. Although the wireless capabilities of the DS was being used to race against each other, the touch screen and other innovative interface features of the DS were not. The touch screen showed a map representation of the race course, while the upper screen showed the kart race itself. 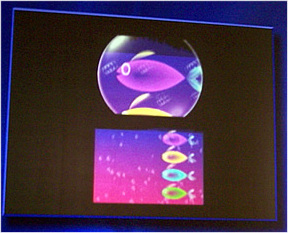 A couple other upcoming DS releases were next demonstrated by Nintendo representative Bill Trinen. Nintendogs was shown using ingteractive voice commands that were used to train Bill's pet dog to sit and lie down. He also showed how a player can feed a dog, and even give a dog a bath. Bill mentioned that over 12 different breeds of dogs would be featured in the game when it ships. The other DS game demonstrated was a very unique musical game called ElectroPlankton—and I'm not sure of the correct spelling at this time. The game features a variety of different musical toys and interfaces that allows the player to experience music, rhythm and harmony in new and unique ways. One mode that was demonstrated included all the various sounds and samples from the Mario theme presented in an interface that was poked and prodded with the DS stylus that was translated into a sequence of sounds that transformed the familiar song into an entire new and original composition.

On the subject of Revolution, only a couple of pieces of information were offered that were not known before:

Mr. Iwata wrapped up his talk by sharing a memory of when the original Smash Bros. game for Nintendo 64 was first shown to the internal beta testers. He recalled that the emotional reaction to the game soon resulted in players shouting at each other while they played, and he fondly associates that experience with one of success. He said that no matter where we live or the language we speak, at the core we are all the same: We are all gamers.

I'm still waiting for the eventual (though far in the future) price drop on the DS before I buy one.
:)

Wait. What's "Revolution"? Should I know what that is?

"Revolution" is the code name for Nintendo's next console, which will be the successor to the Gamecube.

Make that "is" the successor to the Gamecube, Its now called the Nintendo Wii.