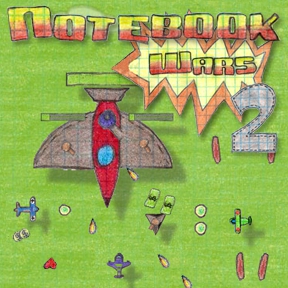 Let's face it: we all find ourselves doodling at one time or another. Whether it's during a boring class lecture or some endless board meeting, there always seems to be something much more exciting and epic that needs to be drawn in the margins of a notebook. Keeping this in mind, Francisco Ferreres and Dream Forge Studios channeled their inner teenage artist and brought this imaginative concept to life in the sketch-based shooter, Notebook Wars. Now the colorful fighting doodles are back in their latest follow-up, Notebook Wars 2.

Like Notebook Wars, Dream Forge's newest vertical shooter has you facing off against the forces of penciled-in evil that come from the top and sides of the screen. Your fight begins with a vulnerable, meekly-drawn plane firing a slow stream of bullets, but it can eventually be upgraded to an awesomely-sketched spaceship with armor and multiple weapon slots. You control your ship by moving the mouse, fire its weapons by clicking, and can drop one of its full-screen bombs with the [spacebar]. This time around you can also set your ship to autofire with [A], helping to avoid repetitive strain on your clicker-finger.

Despite the addition of a numeral to the title, Notebook Wars 2 feels more like an extension of the original game rather than a full-blown sequel. That said, there are still some nice aesthetic additions and refinements in place. The graph-paper drawings are still there, but now planes and spacecraft sport realistic shadows. There are also new friendly and enemy ships, weapons, a map-based level select screen, and a refined shopping interface. The basic gameplay hasn't changed much - you still need to get through a level, earn cash by destroying enemies, and upgrade your ship and weapons to face the next enemy threat. Thankfully it doesn't take very long to buy a sufficiently-powerful ship to take on enemies that absorb more punishment.

All told, Notebook Wars 2 is an engaging, classic-style shooter. Much of the game's fun comes in controlling new ships, upgrading to better weapons, and mopping up waves of bad guys. Sadly there's no ending to the game even after getting through all 13 levels, but completionists will enjoy earning 3 stars on each level and earning badges for enemies killed and cash earned. While it would have been neat to see more new gameplay features (perhaps mission-based levels or more creative boss fights) fans of the original and shoot-em-up enthusiasts should be happy with this next round of epic doodle action.

Other than the mini gun sound, which will make your ears feel like they've been tossed into the fiery pits of hell itself, this is a great game.

Developers, please:
If you're going to make badges or achievements for your games, please make them interesting. I don't know what percentage of gamers I represent, but personally, things like "Kill X Enemies" or "Hoard X money" won't keep me playing. Those aren't challenges - they're grindfests; all they take is a willingness to repeat the same levels over and over again.
You could create some interesting challenges - survive the last level using the original ship, make it through stage X without firing your weapon, play through a stage using four different weapons, beat a level with less than 10% health, defeat a boss without breaking any parts off. Let challenges highlight the diversity of your game, and ask us to play it in a different way than we'd expect to.

I'm ranting on this game because the base mechanics are solid, and the art is good. I'd just rather have no achievements at all instead of the halfhearted ones here.