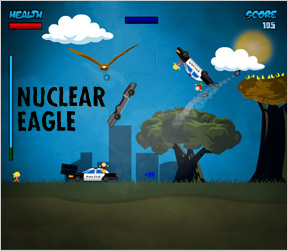 If you're sitting on the edge of your seat waiting for the next Brad Borne game, or if a little repetitive strain doesn't bother you, this next game may be just what you're looking for.

In Nuclear Eagle, a brand new release from Luksy of c404, Brad Borne and Armor Games, you play a mutant eagle—apparently a victim of the nuclear waste from a nearby power plant—with a nest of "babies" to feed. Fortunately, there are plenty of townsfolk from a nearby city milling about, and so the objective becomes a task of grabbing them in your claws and dropping them down or tossing them up into the nest. Eventually, as the townspeople begin to fight back, you must begin to defend the nest as well.

Control is entirely with the mouse. Click to grab, then drag and drop to deposit into the nest. Alternately, you can just give a 'flinging' motion with the mouse as you release the mouse button and the poor innocent townsperson will go sailing through the air. Later levels will introduce police cars and swat vehicles, both of which can also be lifted off the ground. Use these as return fire to create fantastic explosions and combos. You can even grab the people as they are flying. Wacky, outrageous fun.

Try to stay alive as long as you can. The townspeople and police increase their rate of attack and will begin to fire their weapons at the nest. You must protect both you (red health gauge) and your nest (blue health gauge) from harm. If either gauge depletes in its entirety, it's game over.

Analysis: Although the game is a bit violent, it was the explosions that held my interest for a while. The underlying physics engine was programmed by Brad Borne, and considering his work with the Fancy Pants Adventures, it's not surprising that it works here, too, save for a bit of slowdown that eventually occurs once there is a lot happening simultaneously on-screen. Unfortunately, the constant and repetitive click-drag-release motion this game requires to make it even to level 10 to unlock the "City" portion of the game is its greatest weakness. Even after the first play through (I only made it to level 8) my arm was aching, so please use caution and take frequent breaks while playing.

Mindless fun. And did I mention the explosions?

well isnt that fun. really enjoy letting the gunners pile up and then throwing a car at them. I should get help.

one of the more violent games here at jayisgames Im guessing. Also love the eagle animation.

If you let a bunch of people build up below the nest, and then throw a vehicle at them from above, It can blow them into the nest.

Darn, you were right about the wrist pain. It looks good, but it plays awful. =(

That was fun. Great physics, I really enjoyed the chain reactions you can create by throwing cars at other cars, that fall on others cars...

Good game, bad ads.
Any game that has click and drag elements with fast action should not be surrounded with ads. It only breeds frustration and contempt.

The click ads below the game have been removed. If any of the other ads cause trouble, let me know and I'll work on repositioning them.

Occasionally I drag the cars and swing across from one side to another and click the links on the left. Maybe, if a fullscreen version exists without ads?

I believe a fullscreen version of this game would run poorly due to the amount of action on screen and the physics computations that go on every frame. Also, I'm sure the ads help pay for the sponsorships of the game, so asking to do away with the ads entirely may be asking a bit much.

Can't seem to get past level 9. Too many guns.. SWAT in particular.
Fun stuff for sickos like myself.

nice but it would be better if it had a "free play mode"where people, cops, swat etc. didn't shoot

A tip for all players: Vehicles of all types can be used to block attacks on you or the nest. I can't attest to the durability of any type of vehicle, since I throw them back very quickly.

A favorite tactic of mine in later levels: Grab a vehicle, throw it into the air. Another vehicle will soon be coming by, often in the blast radius of the airborne vehicle. The second will explode with the first, often hitting a third as the wreckage comes back down. The chains are quite entertaining to watch, and really help to keep enemy population down.

Sorry to double post, but you didn't mention soldiers that spawn from tanks. I was half way through level 10 when I let a tank move to far and green dudes with machine guns popped up all over the place. There were about 6 from just one tank.

Thanks for this awesome site!

At level 10, you get to carry a tank and squish the army! :D

Hey everyone, definitely glad you all love the game. I understand about the game wearing your wrist out (heck I've been testing it for months!) Luckily I have a pen tablet, but of course that's not a good fix for the majority out there. Pausing with Space and resting for a moment is always an option, but I might try and explore some less tiring control methods. Out of the few I tried, the fling was by far the most accurate and most fun, but it definitely wears you out.

There's quite a few tactics that help out, or just plain look funny. Tossing a car into the air and throwing people at it is good for a laugh, and throwing cars at other cars, then catching the car that was thrown into the air makes for a good strategy, as all vehicles hold and transfer combos to everything they explode on. And as someone pointed out, holding cars above people shooting at your nest, waiting for them to cluster, then tossing the car at them is quite effective. Pretty much, the size of the car determines the durability of the car.

Have fun, loving the positive reviews so far!

This probably wouldn't be as much of a problem if I just bought a laser-based mouse instead of sticking with my gimped trackball one... though in truth it doesn't quite help that the cursor is black, making it so that at the right edge of the screen it's rather hard to tell where it is exactly. I'd prefer at least a choice between a black and a white cursor.

After level 5 or so, when vehicles start appearing regularly, stop grabbing people and only grab vehicles. Stay underneath your nest and wait for them to come, and grab them as soon as possible and smash them straight down to get rid of the people shooting at the nest. If there are enough people there, 2 or 3 are bound to fly into the nest. As long as you grab the vehicles just as they enter the screen, they won't spawn pesky ranged attackers. If a car spawns on the left side of the screen, go over there as fast as you can, and when you smash the car down, try to get all the guys that came out of that car.

Put this on wii. NOW!

Oh my god. I was on level nine and JUST about finished and then I accidentally clicked on something. ): Well, I wasn't very happy about that.

I hadn't noticed any ads...
This is a great game, though! Finished up to the tenth level. I think there should be another version... This was fun, and entertaining!

keheheh... too much fun. I like how you can block shots with cars. Such as: grab a police car, hold it under the nest, let people pile up, shooting at the car, eventually the car drops on its own, which blows them skyhigh, even sending some of them into the nest. I like how the burnt shells of cars kill people too.

This is quite tricky, and seems too hard. But with the advise of others about holding a police car or other vehicle right below the nest to block the guns and sometime drop is a great idea that I never would have thought of! It helps to make it easier, I haven't unlocked city yet, so that tip will help. Thnx! (: