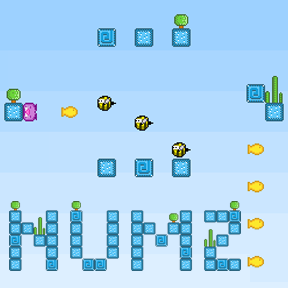 As soon as I saw the title and before I clicked the Play button, I predicted that Numz, a new puzzle game from Games Northwest, would be adorable. I predicted this because it has an unnecessary "z" in its title and kind of sounds like "nom," the familiar sound made by cartoon characters during meal time (see: omnomnom). Lo and behold, my powers of prognostication were vindicated once again. It's totally adorable, and it's a nice little distraction from an ordinary day.

Similar to Orbox and RoadBlocks in gameplay, Numz follows a little purple box-shaped cat (otherwise unnamed, here referred to as Numz) as she journeys through a world riddled with warp points, keys, and golden fish. Tap the desired [arrow] key once in the direction you want to move little purple Numz and watch her go.

Dangers abound, for fate has cursed the poor feline to move in only one direction at a time and infinitely in that direction until she collides with an object. The bees that populate this bi-planar world will cause instant death, restarting Numz at the beginning of the level and, worst of all, stripping her of any golden fish she might have collected on that level! Actually, that's not really THAT big of a deal, as the fish only provide points and are not necessary to open the doors to the next level. You probably will wind up collecting a lot of them, though, since they are typically along the path to the exit.

Numz's cute pixel graphics, retro soundtrack, and smooth feel are enough to win most puzzle fans over. You might appreciate the small amount of backtracking necessary in the game as it lends itself to exploration. Unlike Orbox B, it's a lot harder to lock yourself into an unsolvable position, particularly in later levels, so Numz has a more relaxed feel. Of course, it's quite short, and I would have appreciated a little more innovation. Still, Numz is tailored to satisfy your mid-morning puzzle jones. So...go ahead and nomz on some golden fish.

A nice little diversion... Plus for 8-bit-music, good looking retro pixel style and the fact that you do not *relly* die.
I could do with a few more levels, though.

Ah! How do you control this game? The arrow keys/wasd do nothing. I'm using Firefox, never had this problem before.

I like this take on the orbox idea. The puzzles here have a much different feel.

REALLY like this little game, very fun and you can take your time with it. Only bad point is that if you mess up it restarts the level :(

Restarting the level when you mess up is how these style games work.

What I don't like is that I can't see the entire level when it starts. I have to trust that there will be a block to stop me when I need to travel off screen. I guess I'm just risk averse, or something...

Reading this review makes me wanna hug someone

Nice concept and cute presentation, but I really didn't care for this game. The inability to see the entire play area is a huge problem. On at least one level you can fly off (most you can't) but at other times you have to hurl yourself off into the unknown - that's frustratingly inconsistent. This is made up for somewhat by the game being really easy. It's not so much of a puzzler like Orbox than it is a game about timing. Not really what I would have liked.

P.S. What was the Orbox-style game that had as an easter-egg or maybe unlockable a mode in which you played on an Excel spreadsheet? Anyone remember that one?

[It's called Excit. To find it just click on the "roadblocks" tag in the game header above. -Jay]

Yeah, how *DO* you control this game? I can't seem to figure it out.

Tap the desired [arrow] key once in the direction you want to move little purple Numz and watch her go.

The arrow keys do nothing for me either.

I had trouble with the controls too. Loading the game from NotDoppler worked fine.

I'm with the others - game loads OK but arrow keys/WASD have no effect. Tried re-loading but that doesn't work either.....

It would really help if the people who are having trouble with the arrow keys not working post the OS/Browser and Flash Player versions they're using.

It's really hard trying to reproduce the issue unless we know what we're dealing with here. Thank you! :)

Arrow keys don't work for me either. Running XP with firefox and flash 10. Game works fine in IE.

We can't reproduce the problem with XP, Firefox (3.6.8) and Flash (10.1.53.64). Please try updating your Flash Player and disabling your browser extensions. -Jay]

[I've changed the embedding of the game to match that of the NotDoppler site. I have no idea why swfobject is causing these issues with some people, and only with this game in particular. Thanks for reporting your browser configs. The issue should be resolved now. -Jay]

Around level 18 the game just turns into timing suck. Once a game of this sort of genre with deaths gets large and complex enough levels, there needs to be a checkpoint system like in Netshift in order for the game to remain playable. It's not that the level is difficult to figure out, it's that getting killed at the same place fifty times because of the timing is frustrating and shouldn't be necessary.