The theme of Ludum Dare 27 was "10 Seconds" and though the participants of the game jam were given much longer than that to craft their works (25920 times that, to be precise) and though the period of judging always seems to last to a point where many begin to forget that there was ever a time when Ludum Dare entries weren't being judged, the results are finally in: In first place for the 72 hour event is NXTWPN10, a quirky Unity arcade shooter by Graebor! 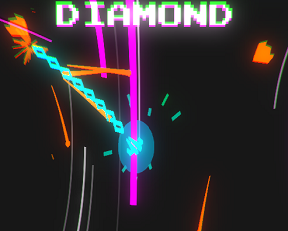 The rules are simple: Use the [WASD] or [arrow] keys to move your ship, and the mouse to aim and fire your weapon, blasting baddies and avoiding damage. The trick is, every 10 seconds, a new round starts, granting you a new weapon and a new wave to fight. Clear the enemies before the timer runs out to convert any remaining time into healing, or just try to survive the whole 10 seconds. Bonuses are given for going an entire round without shooting, or without getting hit. An explosive combination of color and creativity, no one can say that NXTWPN10's visual distortions and pumping soundtrack isn't meant to be a little disorienting. But the impressively varied weapons and mindless joy provided, once you get into the rhythm, make it a worthy winner and a perfect candidate for expansion.

Sight unseen, I left this tab out and thought the title was some kind of email spam. (In fact I think your link is misspelled.) Is it supposed to be pronounced Next Weapon 10?