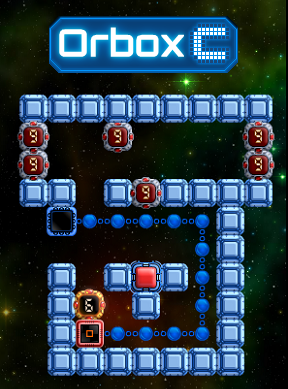 The light is lost. Only one thing can bring it back: Help us, Orbox! You're our only hope! Game Balance's series of sliding-block puzzles is back with a shiny new coat of sparkles in Orbox C! Get prepared to control a little box who is big on bravery, if not so much with the momentum control.

Use the [WASD] or [arrow] keys to direct the Orbox around the play field. Orbox will keep moving in the inputted direction until an obstacle blocks his path. Completing the given task, or making your way to the red exit box will complete each level. In addition, a number of special blocks are scattered about the play space: Timer Blocks which, when tapped, will start counting down to disappearing in a harmless explosion, Angle Blocks which will deflect Orbox's path 90 degrees, collectible Stars, Teleporters which will transport your to the portal of the same color, Gate Blocks, two separated halves which, when intersected, will merge into a single new block, Grow Blocks, empty spaces which will grow into blocks when intercepted, Sensors which activate the creation of other blocks, and so forth. There are 30 levels in all, with your score determined by how quick you solved each puzzle, and how many unique moves were used.

Play all the Orbox games:

Where the previous iterations of the Orbox series had an elegant simplicity in their presentation, Orbox C is something of an assault on the senses. Not that you can deny that swirling sci-fi animations and thumping techno audio will probably attract a larger audience than quiet puzzling. Still, it gets a little distracting, and one gets the feeling that the dev team is trying a little too hard to make box-sliding a tad more intense than box-sliding has any right to be. That said, Orbox C is as cerebral as its predecessors in its puzzle creation, and most of the changes are definitely for the better: the new block elements makes for interesting set-ups, autosave replaces clunky passwords, and the inclusion of a level editor promises new levels from developers and players alike. Orbox C may be a bit heavy on the glitz, but it is a worthy installment in the series, and should charm players both new and old.

I feel abused by this review(I m author of the game)
Roadblocks was inspired by Orbox! Orbox was released earlier than Roadblocks!

Also I would like to add that I thought up this type of game by myself somewhere in 1996 when I even did not know what internet it. And made it on ZX spectrum(in text mode).
Later I found out there was some similar games like that but that did not change a fact for me that I m original author of this type of game.

Hi Arseniy! Dora here, one of the site editors. I would like to apologise for the misunderstanding and I promise you that there was no disrespect meant. :) It was a mistake that I have made sure was corrected in the original review. We love your games and we hope you continue to make many more!

Thanks!
Enjoy the game :)

Cool game! :)
I can't get through level 17. The left side of the lower right sensor is the only part missing.

Because you have to turn it on first. Your first step should be up left up right. You can figure that out by the trail that you can't access that sensor sides later.

The 3 pieces of music played during the level are beautiful! I wondered who made it; if it's you then I'll be very glad if you can release them! I really love your music; Nuclearoids and Laser Tears of Science were my all-time favourite!

Thanks )
Maine menu, 1,3 and win screens tracks written by me. 2nd track(ambient one) written by Trevor and it's available:
http://www.newgrounds.com/audio/listen/514773

My tracks not available yet. I was even think to set up a donation for tracks 1,3(gameplay ones) to make them to the full tracks. Maybe will put them as loops as they are on NG sometime.

And about level 10. Here is a hint. When you go into the final box, explode 2 bombs straight to the right. There should be 3 bombs left inside the box. From now think how to get to the exit until you understand.

Yeah, still stuck. I get to that last box, and I SWEAR I'm thinking, but nothing's coming...

Not last block. From 3 bombs left in that box:
https://jayisgames.com/images/orbox_c_level10.jpg

that you can blow up a bomb right away. This is sometimes useful just to save time, but in this level, it is crucial to blow up one of the remaining bombs without waiting for countdown.