In Night School Studios' story-driven indie horror adventure Oxenfree, on the night she and her friends are planning to spend some quality time together out on a remote island, teenage Alex finds herself bringing along her new step-brother, Jonas... who she's only just met. It's a little awkward, sure, made even moreso by Alex's best friend Ren inviting Nona, the girl he's been pining after, and Nona's friend Clarissa... who happens to be Alex's late brother's prickly ex-girlfriend, and definitely not Alex's biggest fan. If it sounds like a bit of a mess waiting to happen, well, nobody ever said dealing with life and the people in it was easy. But they've got worse problems than uncomfortable silences and catty remarks when they accidentally stumble across something better left undisturbed. 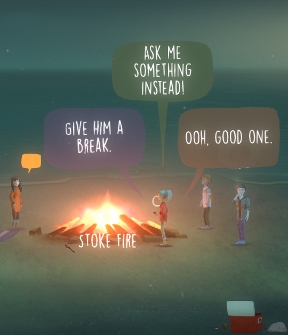 Playing Oxenfree is fairly simple... you use [WASD] to move around, the [spacebar] to interact with things, and click to select dialogue options. Most of those don't last forever, so pick quickly, or choose to say nothing at all if you like, but be aware you can cut people off or derail conversations if you start talking. Using [shift] or right-clicking opens Alex's radio, and clicking and dragging on the screen will spin the dial through the stations... you never know what you'll hear. There are a several different ending variations depending on your choices and your relationships, and buried letters hidden throughout the game, including secret anomalies, give eagle-eyed players a little something extra to hunt down.

Oxenfree feels a lot more organic than most traditional adventure games. You can wander, explore, and fiddle with things while you carry on conversations, and the lack of any pauses means everything has a very natural flow. The downside to this means that you always run the risk of cutting off whoever is speaking. If you choose a dialogue option too soon, often you'll interrupt the other person and miss out on the rest of what they were going to say, while waiting too long means the opportunity to speak can be lost. Just like real life, arguably, but also a little frustrating within the context and mechanics of a game. Most of the gameplay is simply exploring, experimenting, and talking.

Writing teenagers is hard to do without them coming off as scripted and too trendy, but Oxenfree manages it with aplomb. The radio mechanic is neat... to a point. It gets repetitive fairly quickly, and fiddling your way through the frequencies over and over gets tiring, especially later when you gain even more to scroll through. This, fortunately, is secondary to the cast that drives the game. Alex and her friends are very normal, realistic kids, and the relationships between them all form the heart of the game. Forming new friendships or trying to mend old ones, letting go of hate or bitterness when it seems impossible, these are things everyone has been through, and Alex's interactions with everyone are so genuine I found myself rooting for all of them, though Ren and Nona wind up feeling as if they're singing backup more than anything else. The relationship that gets the most screentime is the one between Alex and her brand new stepbrother, Jonas. I liked watching them try to connect as family and figure each other out, and the conversations they have are some of the most rewarding as a result. Clarissa, who spends so much of the game deliberately antagonizing Alex in some genuinely awful ways, is a bit of a harder sell. The game intentionally spends a while letting her get under your skin before it starts to piece together why she's acting the way she is, but it's still hard not to feel she's being more than a little irrational. Which, I suppose, is hardly wholly unrealistic given the context. 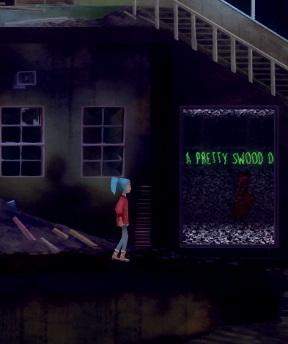 The mystery surrounding the island and what's happening on it is interesting, sure, but it feels overshadowed by the kids. It feels like it's there to provide situations for Alex and her friends to grow in and together with, rather than to be an actual focus itself. The story is strongest when it's about the characters rather than supernatural peril. Someone once said of Garth Ennis's iconic comic Preacher that he could have whole pages devoted to the characters sitting around a table shooting the breeze and still have it be fascinating, and if you like character-driven stories and drama, that's also the case with Oxenfree. But, you ask, is it scary? Well, says I... sorta? Sometimes? Oxenfree is more persistently creepy and otherworldly than anything else, and while there are a few things designed to make you jump, most of it is more weird than anything else. Part of it is due to the way Alex and her friends don't always react to things in consistent or believable ways, stammering and shouting one moment, then idly chatting about beach vacations the next. It's sometimes a little hard to swallow that they wouldn't be more wrapped up in the bizarre and, yes, life-threatening things happening around them that they'd be too preoccupied to talk about much else.

Still, Oxenfree is a horror game with heart, more about people than anything else, and in that it succeeds far, far more often than it fails. The voice acting is top-notch across the board, while the expressive character animations make the small models feel alive, and it all feels very authentic and relatable in a way few other horror games do. Even if you've never lost a sibling or found yourself thrown in with a brand new family, the themes woven throughout resonate and make the cast believable and genuine. It's not necessarily about complex, deep character drama so much as it is people simply being, well, human, which admittedly isn't going to be for everyone. The more fantastic elements of the plot become a lot more interesting when they start to come together beyond simply being there to provide a spooky framing device. It's hard to say how or why without spoiling a lot of specific plot points, but Oxenfree deals a lot with regret, anger, selfishness, and second chances. It boils down the events to what they mean for the people they're happening to, rather than merely falling back on "We have to save X from Y!" Oxenfree is a game for players who enjoy small-town drama and hanging out with friends, rather than simply being yet another coming of age story, and is well worth the time it'll take you to kick back with somewhere cozy, comfy, and just a liiiiittle bit dark and spooky.

some quality time together out on a remote island

I don't see what could go wrong there.