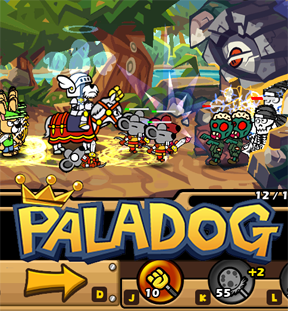 In FazeCat's everything-but-the-kitchen sink strategic defense game, Paladog, Critterland has been invaded by zombies, witches, skeletons, and just about every evil little thing you can imagine, including television sets! It's up to you to fight them off, but are you dog enough to take them on? Move Paladog back and forth with the [WASD] and [arrow] keys, use your number keys to choose and build different units, and [J], [K], and [L] to use special attacks. Units cost food and special attacks cost mana, both of which are generated automatically, while money for upgrades comes from killing bad guys.

While you've probably seen most of the gameplay concepts before, the game does feature a ton of content, from nine different units to a whopping 120 levels, including special mini-games. Also, the artwork is great and the enemies so cute you almost don't want to bash their brains in with your mace...almost. It's such a hybrid, juggling so many elements that it takes on a little more than it can chew. Though many of the elements it tries on aren't as fleshed out as they could be, Paladog's sense of style and ambition helps keep it fresh in a way that other defense games might wind up as one-note. You'll find that the upgrades can be pretty expensive, but this is one puppy that spoils you for choice with tons of weapons and magic rings to liven things up. Paladog isn't quite perfect, but is a big, cuddly, newspaper-fetching machine, that brings back the Sunday paper... and slobbers all over the funnies. And you love it anyway.

A "bunny rush" where you spawn lots of bunny archers and a few turtles to defend if you have the food. Every level except 5-19 fell to this when I combined a food mace, food ring, and the skills for haste, food production, and special attack.

Pretty simple and easy, but a lot of fun. Who knew you could have such fun spamming mice at zombies?

Beat this the other day. Got stuck on a boss until I figured out that Bunnies are the secret to beating the game. It's a shame that other, far more expensive troops are not worthwhile in the long run.

What, exactly, do the upgrades do? You don't see an increase in the unit's stats, so what is getting better about them?

@neo1973 The unit's stats DO increase, it's just that the max for each stat is in the thousands, so the increase is so small that you can't see it. They should have left the actual numbers for the stats visible. ;{

I never thought of spamming certain earlygame units until I read it in the comments elsewhere. Before that, the game was quite challenging and those ghosts were soooo annoying!
Anyway, it's an enjoyable game with great graphics and it's also quite long. I never thought being a paladin dog would be so awesome. The dialogue isn't written very well, but I doubt many people care.

I enjoyed it but thought it was far too long and repetitive. I thought needed a more engaging story to really justify the length.

fully upgraded spam-bunnies strategy, with a gradual transition to Pink Dragons and Penguin wizards when they became affordable. I suspect that if I spread my upgrades more equitably, it would have taken me perhaps three times as long to finish.

Cute game on flash, but very good iOS game. Gorgeous port, with differences that make me actually like the iOS version better. It's not much different, but actually seems harder. Definite buy for me.

Did it really need the "Humans were evil so they went extinct so funny animals (who are pure of heart!) could replace them" bit? If you're only going to include about a paragraph of story, it'd better be a *good* paragraph.

I can recommend watching the trailer for this on You Tube

I used a strategy of Bunny and Poison spam. I poisoned all enemies and let Bunny pick them off.

I put most of my points into food and some into mana, it works =P

This is fun! I'm almost finished and coming up on the last boss. Has anyone played the (Apple) 99-cent app store version of this? Is it fun/effective to play without any extra paid items or upgrades?

I played with big units -- rhinos, dragons, penguins -- for a while, and it worked pretty well, but a bunny-and-tortoise strategy worked even better.

@ misspadfoot, I had posted just above there that the iOS version was awesome--wonder if the app store version is the same? iOS seems just a bit different in terms of when certain items become available, but otherwise have really enjoyed it.

Hi Guys,
I am really struggling on level 4-24 on the iOS app.

Any strategies I could try?

How do I Kill those big green monsters?! I keep dying.

How do you unlock the other units?? I'm playing this game on Kongregate right now, and I'm trying to get the medium badge (where you have to unlock 5 units, but not including the mouse one). I've already gotten the archer bunny and the bear knight, but how do I collect the others? Is it a matter of what stage you're on? Or what level?

Brandon, to unlock units you just have to "upgrade" them at the initial high price.