When I went through immigration in 2007 to cross from Canada to the United States, I had to keep reminding myself how easy a process it was for me compared to others. Expensive and time consuming, sure, but it could have been a lot worse, and a lot more difficult given any number of extenuating circumstances. Lucas Pope's indie sim game Papers, Please paints a very different picture of the experience, as you take on the role of a newly assigned governmental agent in charge of allowing or denying citizens through the first immigration checkpoint opened in six years. It starts out simple as you make decisions based solely on citizenship. But you'll soon realise that as political tensions change and people become more desperate, anything goes, and you'll need a keen eye (and maybe even a hard heart) to keep going on. 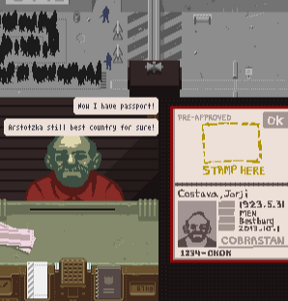 At the start of each day, your booth will open for business, and clicking the megaphones atop of it will call the next person in. They'll present you with any documents they have, and it's up to you to approve or deny them using the stamps that pop out when you click the grey arrow at the left side of the screen. As time passes and the situation changes, the documents and other requirements will increase and change too. Everything from a person's appearance to smaller details on their passport or entry ticket need to be carefully scrutinized for discrepancies. Are their documents out of date? Does the city they claimed issued their passport actually exist? Look carefully, but don't take too long, since your pay is determined by how many people you correctly deal with before 6:00PM, and if you can't pay things like your heating, food, or rent, the health of your family will suffer. Make mistakes, and you'll be penalized, and the easily spotted "gimmies", like a person claiming they're coming to visit despite paperwork saying otherwise, will grow few and far between. 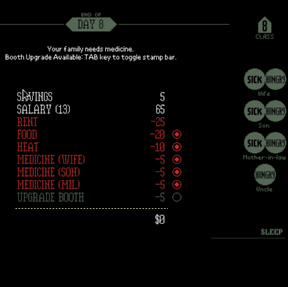 Though it seems like an easy task initially, things initially get hard. Training yourself to notice small details like a misspelling of a city's name is a must, and the ticking clock means you need to learn to spot these things immediately rather than having to drag out the rule book repeatedly. Constantly dragging things around and clicking through menus can get tedious and awkward the harder things get, even with upgrades, and the sheer amount of documents and reference material you need to juggle can be daunting. The in-game instructions can unfortunately be a little vague at times, causing valuable time to tick by as you scramble to figure out how to use your newest security measure. Finish Story Mode without losing your job to unlock Endless Mode, which is exactly what it says on the tin.

Analysis: The visual style, while effective in terms of setting and narrative, sometimes works against you, making it hard to match fingerprints, but especially when it comes to determining whether the sex of an incoming person matches what it says on their information. I was dinged several times for allowing people with "invalid gender" to pass through because I just assumed I was looking at a more effeminate man, or a stockier woman. As a result, you have to do more invasive scans and searches of people whose sex doesn't neatly fit in a visual box, which, while fitting for such a dark, rigid setting, might be upsetting to some people, so discretion is advised. I felt a flush of shame the first time I forced a person who looked masculine to strip naked to prove their sex as female... which is, arguably, sort of the point. It's your job, sure, but how poorly are you willing to treat other people for your paycheck? Especially when your family might be sick and hungry at home, and your paycheck, and thus their health, relies on following the increasingly restrictive rules set forth by your government? Papers, Please will make you feel the genuine disdain some people have for you and your willingness to bend for your government, and it isn't a happy feeling. 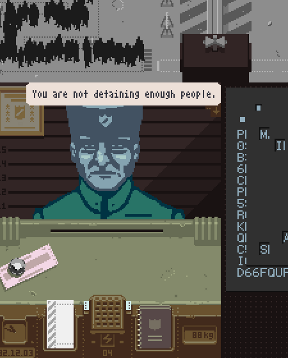 With gameplay consisting solely of checking paperwork for error, Papers, Please is one of those games that won't be for everyone, so you'll want to try the original beta version to see if it appeals. The game's narrative is sort of an abstract one, and the daily dramas that can pop up as people filter through your booth construct a bleak world around you. It's also worth noting that this is a depressing freaking game as you constantly battle to meet your government's demands and keep your family taken care of in a way that reminds me of the uphill battle in Ayiti: The Cost of Life, albeit on a simplified scale. Realising you didn't double-check a passport number and the sinking feeling that comes with knowing that means your family might go hungry that night is a special sort of soul-crushing. Especially when the rent goes up. And your son is already sick. And the woman in front of you is missing the documents she needs and is begging you to let her through because she'll be killed back home, but you can't afford another violation. And you don't even know if you can trust anyone because the last person with a sob story turned out to be a suicide bomber. Yaaaaaaay, gaming!

Papers, Please is one of those games that wants to know... how far is too far? Will you choose sides, or just choose your family? Though you're stuck in your booth with little variation, the way the game manages to tell its story and paint a picture of the world you live in is impressive, revealing layers of depth in snippets of newspapers or just a few words exchanged with travelers. Of course, the sheer amount of information to keep track of means this is also a unique game that at times feels more like work than play... again, admittedly sort of the point, but not something that will appeal to everyone. With its complex themes and clever approach to immersion, Papers, Please more than deserves a look, and will likely occupy your thoughts for quite some time.

If anyone puts a rating of less than 5 stars, I'll select them for a "random search", and seize their passport.

when I download the demo, I ended up download delta toolbar by default. Great... NOT!!!
It disgusting to get rid of it, is plain malware.

kellogshappymeal, I'm not sure where you got the toolbar, but it definitely was NOT from the demo. :( I just downloaded both demos myself and all you get is the game, I can promise you that. There is no malware or even optional install anywhere in either demo version.

I..didn't realize you could actually spend money on medicine to save the son..
Flip.

Does anyone know if it is possible to detain the athlete and the human trafficker?

mark the person's passport and something basically screaming "Don't let this person in the country!" In those cases, the newspaper article and the note left by the defiant prostitute.

I am aware I am just about a month late, but eh, might help someone.

To detain someone, you have to present evidence that they SHOULD be detained. Once you do, the option "detain!" will appear on your examination panel. Click it, and your shutter will automatically close, and the person will be picked up by the authorities. You will be paid for going to the trouble. Once the person has been arrested, you can open your shutter again.