Ah, the Galapagos Islands, remote, mysterious, home to some of the world's most rare and intriguing species, the Galapagos are... okay, look, let's just get this out of the way right now. We are in no way shape or form promoting the "environmentalist propaganda" agenda here, it's just that Paradise Quest, by I-play, is one gorgeous match-3 game with a cool new dynamic that is wicked fun to play. 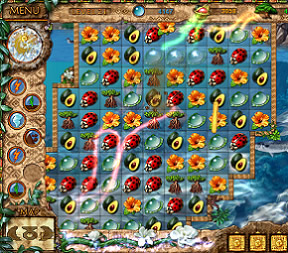 Paradise Quest is the story of Dr. Evan Finch, a biologist who travels to Isabela Island, the largest of the Galapagos chain. Once there he finds that the island, through a chain of natural disasters (typhoon, earthquake, volcano, etc.), has been completely denuded of all life. The intrepid Dr. Finch must then gather resources and discover habitats by playing match-3 games. Once a habitat is unlocked he can use the resources gathered to buy an environment upgrade, consisting of landscapes, trees, plants, or other things that will lure back some of the species native to the Galapagos. Dr. Finch must continue to gather resources, unlock habitats, and bring back plants and animals to repopulate Isabela, all the while gathering mysterious pieces of an artifact that may point to human habitation long before the Spanish discovered the islands in 1535. In the latter quest he is aided by his funny and sharp-tongued archeologist friend, Professor Katherine Fitzroy, whom he calls in cut-scenes in-between finding resources and habitat.

Gameplay is simple if you've ever played a match-3 before. Simply click on an icon in the grid to move it so that it makes a row or column of three (or more) and they will disappear, being replaced by more icons. Some icons represent the materials to be gathered (wood, water, and food) and others simply represent native flora and fauna of the islands. Pieces of habitat or of artifacts are surrounded by stone tiles, which must be broken to release them. There are also tiles covered in sand. Breaking the sand tiles (or "digging" in the sand) can release a spate of cool power ups and other goodies to help you along the way. Once you have enough pieces of habitat they can be fitted together in jigsaw fashion to unlock a new area of the island, allowing room for more species to inhabit. And once new species move in, you can go to the area and photograph the animals, insects, birds, and fish as they move around their magnificent environments. 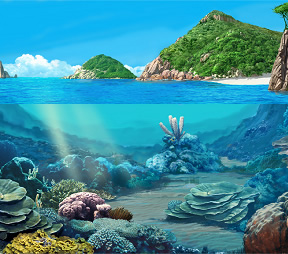 So far it sounds like the average match-3, correct? Well, here's where a fun dynamic comes in. The match-3 grids get progressively larger, too large for the screen in fact. These grids "float" above a picture of one of the habitats, and in order to reach all the areas you must make matches near the sides of the screen where you wish to travel, making the grid move. A handy map feature will appear in the lower left of the screen showing the area uncovered and giving the player an idea of where to go to uncover more. Making matches doesn't just gather resources and free power ups, though. It also helps a vine grow at the bottom of the screen. When the vine is full-grown the player can then use the vine to "swing" to a different area of the map, without the sometimes tedious process of making continual matches in a certain direction. Tarzan yell while using the vine is, of course, optional. Occasionally, the player will also end up in a night scene and must find torches to light the way as they make their way about the grid.

Analysis: With its mixed terrain and odd collection of wildlife, Isabela Island makes for a gorgeous backdrop to this amusing piece of match-3 fun. Paradise Quest is undeniably gorgeous to look at, from the rocky cliffs to the limpid blue pools of the lagoon, from the gorgeous plants to the unique, animated animal population. A lot of effort has gone into recreating the actual landscape and species endemic to this UNESCO world heritage site. Adding to the experience is the lovely music, a mix of native drums and other rhythms that fit the game perfectly. 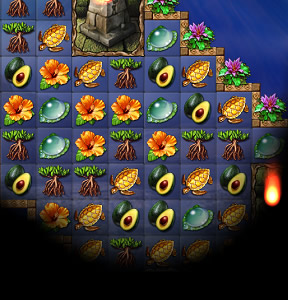 With both a timed and an untimed mode, Paradise Quest is casual gameplay for the entire family, from those who like it frantic and fast to those who would like to take their time and enjoy the scenery, and everyone in-between. The match-3 madness is broken up by the cut-scenes, puzzles, and the task of photographing all the returning species for the player's photo album. Once a habitat is completely repopulated, a snapshot of it will be created in the player's pictures folder (in Windows) that can be used as lovely desktop wallpaper.

There is a ton of gameplay to be had here. The game is open ended, so even after you unlock the 6 habitats, 32 environment upgrades, find all the pieces of the artifact, and photograph a stunning 75 returning species, you can continue to play as you like or start over again with a new identity. Just making it through to the "end" can take days, especially if you take a break every now and then.

The only complaint about Paradise Quest might be that in the upper levels in timed mode it can get very tricky to finish before the timer runs out. And after about 50 levels or so the game can get a bit repetitive. However, these are minor quibbles in what is otherwise quite an enjoyable game.

Gorgeous to look at, easy on the ears and with a fun new twist to the old match-3 dynamic, Paradise Quest is tons and tons of match-3 fun, with enough side tasks to break up the gameplay and keep it feeling fresh. Entertaining, educational, and fun for the entire family.

The best game I've ever bought/played on the internet. The added twist makes all the difference to the usual match 3 games.

This is one of my favorite games. I am not sure what you mean by "up the level 5" in your comment. I am on level 267 and don't know if there is ever an end in sight. Occasionally I get really, really stuck, such as level 50 (I think) and it took me weeks to pass. Now on level 267, I've been here 2 days, but will just have to keep working on it. I know it's impossible for someone to do a walk through for each level, but when I'm stuck I wish there was help! Sorry I couldn't do more.