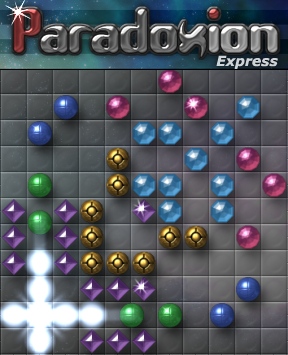 It seems like physics puzzlers are all the rage in the browser gaming world of late. Don't get me wrong, I love me some phuzzles, but sometimes I reminisce about a pre-Box2D world. My eyes get damp and I begin to wonder if there's anyone out there making good old-fashioned puzzles. You know, full of tiles and based on turns, with a gigantic gleaming UNDO button just itching for the opportunity to render your mistakes undone.

But along comes Paradoxion Express and the tears dry up; birds flutter cheerfully to and fro; Al Gore serenades whales and hugs the lowly wombat; in the distance I hear the voices of children singing. Then my roommate gives a hearty belch and I awake and find to my dismay that none of it is real except for the game, which on second thought is OK by me — children make lousy singers.

Paradoxion Express is a Flash-based version of Paradoxion, a download we featured back in April. Created by Russian game designers VSBgames, this free browser version features 60 levels of elegant logic-based combo-making gameplay. The goal is to eliminate all gems and orbs from the board through careful planning and placement. Orbs explode when you line them up in rows of three or more (though some require more) and gems explode when you group them in boxes of four. Explosions can push other objects, which will also explode if they become correctly aligned. By arranging the elements correctly, you can set up a chain-reaction cascade of explosions, sometimes clearing the level in one single blow.

Later levels introduce bombs, which explode when they are moved and destroy any elements near them while pushing away further ones. Another tool you'll see later in the game is shifter arrows, which can be used to shift the position of elements in the field of play. While these extra items offer a needed shake-up (and difficulty bump) from pure orb and gem levels, they do so at the expense of simplicity and elegance. I'm not ready to declare this a bad thing though — there's plenty of elegant levels early on, and it's nice to end the game with some good head-scratchers. if you do happen to get stuck, you can always click "Show Tip" for a hint at the solution. Clicking this button will also give you information about new elements the first time they appear in a level.

Analysis: Paradoxion Express captures that "classic puzzler" feel quite well, and would seem at home on some of the earlier hand-held gaming devices if not for the modern graphics and sound. Yet there's also a certain uniqueness about it: this particular gameplay model lends itself particularly well to long, flowing solutions that are just downright fun to watch.

For the most part, the level design takes full advantage of these cascades, often featuring symmetric levels for enhanced elegance. On the one hand, these levels are what make playing Paradoxion Express a supremely satisfying experience; on the other hand, solving them becomes less about using logic to discern which elements should go where and more about just sensing the gaps and filling them in. Again, this may be a good or a not-so-good thing, depending on your personal preference. As mentioned before, the other elements help enhance the logical aspects of the puzzles, but these only appear in the third level set, which remains locked until you finish the first two sets.

A more definite weak point to the game is the user interface. To place an element, you first have to click the element you want to place, then click the tile in which you want to place it. You are not allowed to move an element once you have placed it, though you can always undo your moves. It would seem that dragging the elements from the tray to the board would be a better fit for the fluid aesthetic of the game, and it would be great if you could play around with the elements out on the board, trying them out in different positions to help visualize a solution. At the very least, I should think it would be easy enough to keep an element selected in the tray so that you can place all of one type without having to reselect it every time.

Although these problems can be somewhat irritating, they are really just minor issues when the game is viewed as a whole. So if you're in the market for a soothingly challenging puzzler that's fun to play right from your browser, try Paradoxion Express!

Children make good singers!! You just need to teach them how to do it right!

Why do some orbs not move other orbs when they explode?

the problem with being able to remove pieces is that you can set off a reaction, and the piece can block motion, then you remove it, which is not a valid solution.

isley - it depends on where the last orb goes in.

If it's placed in the middle, both ends will push orbs:

If it's placed on the end, only the other end will push orbs:

mystify - true, pieces would need to lock in place whenever an explosion occurred or a shifter is used. Still, it would be nice to be able to move the elements around before that happens.

What does the paradox do?

Have you tried updating your Flash Player?

That's interesting Smoke, the same thing was happening to me with Side Effect earlier, which quickly made me /ragequit... I'm also on a Mac, with I think the latest version of everything, using Firefox. This game works fine for me though. Hmmm... I wonder what's causing it.

As far as this game goes, for the few levels that I had time to play (up to where the silver balls appeared, I'm not sure which level) it was fun. I really only had 2 problems with it. 1 would be that as zxo mentioned in the review, reselecting balls of the same color became slightly annoying. The other was that I was disappointed in the fact that not all of the levels were of the "Figure out where to place all but one ball, then put the last one in and watch the chain reaction happen" type, and some required a couple reactions. Maybe I just was solving them wrong, but I personally would have preferred just watching one big chain of reactions instead of having to create some little ones to solve the puzzles.

Great game though, I'll have to come back to it later.

I like this game. The puzzles are interesting, the mechanics are unique, aesthetics pleasing, complex enough that the solution is not immediately obvious but simple enough to reason out instead of randomly trying things, no arbitrary randomness that can make you fail...
I'd have to say its the best puzzle game I've played in a long time

Hi guys, thank you for feedback and I'm glad you like our game! :) (I took part in both Paradoxion and Paradoxion Express development as game designer and programmer).

Regarding the inconvenience with controls - well, it was my decision, and it was based on two things:
1)Paradoxion Express levels are smaller and has less inventory items, compared to downloadable version. So less to place on the board - less problems with controls.
2)It is kinda difference between free Paradoxion Express version and premium downloadable Paradoxion that is packed with more convenient controls (mouse wheel for selection, hot keys for easy re-selection), among other features.

And one more thing is that Paradoxion Express is our first flash game, and actually I thought that flash game players audience will ignore keyboard hotkeys, so they weren't added. Looks like I was wrong, and we'll keep this in mind in our next games.

Speaking of difficulties with solving levels - try googling for Paradoxion Express solutions, some time ago I saw somebody posted full set of 60 video solutions online. Speaking of downloadable Paradoxion levels - solutions can be easily viewed via Menu->Online Solutions.

Once again, thank you for feedback and for playing Paradoxion! :)

I can't complete level 16, and its driving me crazy! its the only level on the first pack that i cant beat, could someone please help me?

Smoke, I'm also on a mac and the same thing has happened to me before for some reasons flash games sometimes don't recognize the mouse unless it's clicking try quitting and reopening

Also on a mac, second time playing the game and haven't had any issues with the clicking myself. Good game but stuck on eleven and it's bugging me to no end, I feel pretty stupid.

Nevermind!! The power of posting, right?

I really like this game. Everything, from the idea behind the game to its actual implementation works beautifully. The interface can be tiring at times, but that didn't stop me from having a great time playing. But the best thing about the game must be the rewarding feeling you get when you put down that last ball in a puzzle and watch everything blast away in one huge chain reaction.

"I'll just give this a quick go, looks alright..."

Darn you JIG and Paradoxion.

Any hints on level 55? The tip the game gives is pretty much useless.

Four blue gems are already in place; don't move them.

To place the two lowest blue gems, go around the gems straight above them

The green orb should go up, then left, then down

There's a bug that renders level 16 unwinnable. One of the blue orbs won't move.

Guest, if that's what I think it is, it's no bug, it's a game mechanic. I agree it can be a little confusing when you first encounter it though, since the game doesn't explain it anywhere. Anyway, see the fourth comment (by zxo) for an explanation.

This is a great game. My only beef with it (besides the control issues already mentioned) is that the level hints (which you ordinarily wouldn't use unless you were stuck) sometimes contain information about play mechanics that you actually need... and there's no way to browse through the hints without loading the individual levels.

I don't know if anyone's still playing this game, but I'm currently working on Level 30. Here are my notes so far:

My hypotheses about the horizontal symmetry, the 2x3 blocks of Blue Gems, and the horizontal Blue Orbs serving as the detonator were all correct. My biggest error was in assuming the vertical strings of Blue Orbs would serve only to detonate something else, not to be detonated themselves in a chain reaction.