I don't suppose you've ever felt trapped at a really tedious party, wishing you could throw off the shackles of social convention and impale your host on a cocktail weenie toothpick, make a rope out of your own hair to escape out the bathroom window, beat yourself unconscious with the cheese tray—anything to avoid listening to some guy tell you another story about his golfing ability? In real life it's the opposite of entertaining, but in Party Foul, which took fourth place in CGDC7, it makes for a hilarious puzzle to test all your escaping power.

Party Foul is interactive fiction, so you use a text parser to interact with the game. Party Foul includes a great tutorial, so if you're new to IF, definitely type "yes" when the game asks if you'd like to do the tutorial. 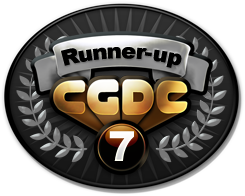 Otherwise, the game uses typical IF text commands, such as l/look, x/examine, take, put, the cardinal directions (n, s, e, w, nw, etc), i/inv/inventory, and so on. If you ever feel stuck or confused, simply type help, hint or about to get more information.

Analysis: Party Foul contains three major puzzles, and they don't have to be done in any specific order. So, if you get frustrated at lack of progress on one, go hack on another problem for a while. While some parts do require timing, the game as a whole isn't like, say, Varicella where one mistake puts you into an unwinnable state. This would be a good introduction to interactive fiction for a beginner, and for a pro, it's still an amusing diversion. Especially if you've found yourself in a similar social situation. After all, how many times have you really needed to escape from an underground alien lair, or a post-apocalyptic zombie outbreak?

Sometimes the parser isn't quite up to snuff. There's one point where you have to specifically "order" something. I tried about ten different combinations of "ask for" before I gave up and looked at the walkthrough. For the most part, however, the parser feels natural, and the puzzles, while not easy, are logical. The hint system is great, too. It doesn't immediately tell you the answer, but gradually gives more and more information. Sometimes your brain just needs a little nudge in the right direction, and this provides it.

The best part of Party Foul is the humor. It's very dry, tongue-in-cheek stuff, most provided by your less-than-desirable company. It's worth trying all the actions you can think of everywhere, on everyone, just to see the sort of response you'll get from your fellow party goers. I'll leave you with its opening quote, from P. J. O'Rourke: After all, what is your host's purpose in having a party? Surely not for you to enjoy yourself; if that were their sole purpose, they'd have simply sent champagne and women over to your place by taxi.

Beat it, and with no external help. It took me the longest time to realize that

wiping the tomato juice off the celery stalk

I hadn't specified that I wanted to do it with the napkin.

I finished getting my coat and my casserole dish, but I can't seem to get my husband off the couch. I tried

turning on the microwave, toaster, hair dryer, and heater at the same time to trip the fuse;

but it hasn't worked. Any clues as to what I'm missing? I used up all the in-game hints and still can't quite get it.

The hostess goes around unplugging things that you've plugged in. Could that be the problem?

Once you get the lights out, you have to go to the TV room (in the dark) to get the game going again, apparently. (This is what derailed my playthrough.)

Beat the game with no hints. A quite amusing little game. The parsing was frustrating when trying to

but overall, quite enjoyable.

Here's a good little cheat! After getting rid of Frank, go into the den and

open the sliding door to let the dog in. Abbey will carry him back onto the porch, when she's on the porch, close the door!

The person will stay there and you can go about your business without interference. The cheat will stop once you manage to turn the TV off, because your husband and Chuck will be there to let the person in.

Are you sure that all the items were turned on at the same time? The hostess moves around and she will turn off any items she finds on. When she does that, the game will mention the lights becoming more normal. You have to get everything going simultaneously.

This was one of my favorite entries. The puzzles were interesting but not too hard and the story was just hilarious. Who hasn't been in a situation like that? Fleeing uncomfortable parties is the ultimate escape!

I can't figure out how to

dry off the celery stalk. I've got the napkin and the purse, but I don't know how to phrase it to make it work.

It took me a long while to realise that the game is a stickler for definite articles. In other words, just "wipe celery on napkin" doesn't work - you need to insert a "the" in the phrase.

I can't seem to figure out how to get the raisins. Any help?

Oh! I found them! But now I don't know where the hair dryer is?

I dont know how to get the celery from ron...any help?

Had a bit of trouble opening the

glass sliding door to let in the poodle

Dropped my sunrise drink in the den, let the poodle in, smeared lipstick on Frank

Didn't do anything else in particular, but the door just wouldn't open - no response at all from the system.