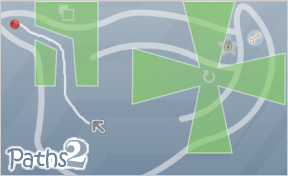 Paths 2 is a sequel to the original action/puzzle game Paths by Tyler Glaiel of Glaiel Games. While it retains the same concept and setup as the original, Paths 2 adds some much needed polish to the interface and visuals, making it a much sleeker game to pick up and play.

The idea is to draw an unbroken line leading a red ball to the goal in each level. Carefully plan your path to avoid walls and movable green objects, then hit the [spacebar] when you're ready to roll. Use the mouse to twist, slide, resize and rotate green obstacles before you begin and while the ball is moving to keep the path clear.

Improvements in Paths 2 include a much better visual package with smooth, translucent objects and a better color palette. A reset button has also been added to give players a clear method of erasing the path and starting from scratch. And of course the puzzles are brand new and feature many new types of movable obstacles to contend with.

The interesting mix of thoughtful pre-planning and fast reflexes makes Paths 2 a challenging and entertaining game. With the sleeker visuals and improved gameplay, it's a marked improvement over its already captivating predecessor.

Cheers to Ttf for sending this one in!

First comment, just 30 seconds after this review was posted :)

It must be me but I cannot get the green things to move. I feel like an idiot!

Does anyone know how many levels there are? I got up to level 19...

Same here -- got stuck on 19 because I couldn't figure out how to shrink the green thing back down to normal size :-(

The game is slick and entertaining but is let down quite badly, in my opinion, by its missing features... no way to turn off the music and not saving your position - which I found out the hard way when I accidentally clicked on 'Menu' instead of 'Reset' and the only option I had was to start over! :(

extremely addictive game!! be warned if you actually want to be productive today.

ditto on the menu button being too close to the reset button, no saving position, and an inability to mute the music

There is a slider on the startscreen to mute the music.
Took a while for me to find it :-)

Even if I manage to get the 'inside wheel' turned (which I have only just done), I then have about 0.1 of a second to turn the 'outside wheel'....

(and that's on the first pass, to get the key!)

It's even harder to move that green bar than coping with the unshrinkable one.