Phantasmat has bounced from developer to developer over the years, with Phantasmat: Crucible Peak after the original, and now it's Eipix is up to bat with the next installment of the horror-themed hidden-object adventure, Phantasmat: The Endless Night. Let's get one thing straight right away... if you're a school organizer and the prom falls on the 50th anniversary of the tragic accident that shook your town half a century ago, wouldn't you, I don't know, reschedule just to be safe? Especially when said tragic accident was actually the deaths of everyone who attended prom fifty years ago? I'm not saying the townsfolk headed to the prom are guaranteed to be run off the road by mysterious apparitions appearing in front of their cars, waking up only to find themselves back in the sixties and their child is missing and the town has suddenly turned dark and hostile, beset by forces beyond our understanding, just... y'know... why risk it? But because nobody ever listens to me, that's the predicament you find yourself in here, forced to hunt for your daughter in a town that seems to have gone back in time, with a whole lot of spirits who don't seem to know (or care) that they're dead, and one mysterious figure who seems to want to help you join them. Despite a somewhat low level of challenge and a struggle with its own pacing, Phantasmat: The Endless Night delivers a genuinely intriguing story, fantastically creepy atmosphere, and just the right amount of jumpscares to craft a stellar casual horror adventure. 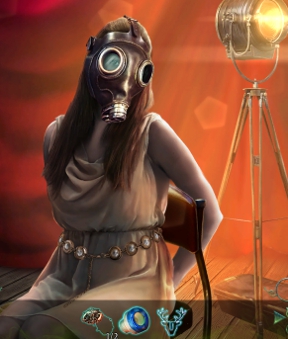 Creepy dolls that ooze disturbing malice? Spirits whose mindless devotion to their purpose in life have twisted them into vicious, hostile mockeries? Eipix, have you been reading my dream journal? Phantasmat: The Endless Night is a horror game in a genre that typically shies away from being actually scary, and brings a great deal of creativity to its overall design and spooky scenarios so that it doesn't simply rely on jumpscares or familiar imagery. The details of the plot beyond finding your daughter, such as what really happened to the people at the prom once the hallucinations set in before the chemical explosion, are actually pretty gruesome. The downside, however, is that The Endless Night suffers a little from an apparent reluctance to be as scary as it could be, largely due to the fact that a lot of the frightening scenes don't fit well within the pacing and mechanics of a casual hidden-object scene. You'll be menaced by characters who will then just stand there forever until you pull out the item you need to pass by, the main character makes cheesy exclamations like "this is uncanny!" and seems really slow on the uptake, and the pace is slowed down by a lot of back-and-forthery and minor item puzzles where nothing really happens. Am I picking nits here? Sure, but only because Eipix has otherwise set the bar so high. Despite a really strange blend of real actors and illustrated characters, The Endless Night is an absolutely gorgeous game, unafraid to use surreal imagery and saturated colours in their environments to up the creepiness. Sound is subtle, with an emphasis on atmospheric groans and creaks as you explore, and on the whole the voice acting is actually, well, kinda exceptional. 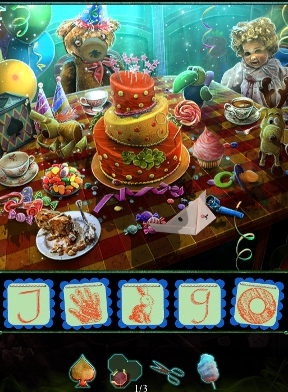 A lot of hidden-object games these days have broken from the traditional, straightforward list format in favour of more elaborate mechanics, and The Endless Night offers a lot of variety in this regard by combining multiple puzzles and different list formats (silhouette, word, morphing objects, etc) into a single scene to keep things fresh. Most of the gameplay tends to focus on classic point-and-click adventuring, however, so players who like hidden-object scenes without like-liking them don't have to worry about being buried under an avalanche of them. While on the whole the difficulty of the actual puzzles seems to fluctuate wildly, it does tend towards the easy side of things, though if you're like me you're willing to forgive it in a game that features a puzzle where you need to navigate a series of dark classrooms with only a handheld flashlight and a clock while things flit by on the edge of your vision. Through the course of the game you'll visit a lot of different locations, the plot unfolding slowly as you go, and most players will find the main game will take you around four hours or more to complete. Though it could have provided more of a challenge and been stronger by trimming some of the busywork that makes the pacing more than a little bumpy, it still provides a captivatingly creepy experience with a remarkably solid story at its core. If you like horror that's unsettling rather than merely gruesome or shocking, Phantasmat: The Endless Night is an easy recommendation for any casual horror adventure fan looking for something to while away a dark and stormy night with.

Although I haven't finished playing this one yet, I have to agree wholeheartedly with Dora's review. The to-ing and fro-ing is a little annoying, but the HOGs and puzzles are, so far, great. Definitely a quality game and even better, today is half price games at Big Fish, including Collector's Editions. Bonus!!