Phoenix Wright games have always been sort of brilliant. A series of visual novel-style mystery adventure games originally for Nintendo's handhelds, they mostly feature around the titular protagonist, defense attorney Phoenix Wright, as he struggles to prove the innocence of the clients he's representing in every bizarre case he comes across. The series has already made the jump once to iOS, but the release of Phoenix Wright: Ace Attorney - Dual Destinies is still a bit of a surprise given that the game originally appeared on the 3DS just last year... though not an unwelcome surprise by any means! With the first episode free to play and the others available individually for $5.00USD (or grab all four at once, not including the bonus mission or outfits, for the discounted price of $15.00USD) as optional in-game purchases, there's never been a better time to pick up this smash-hit series that balances comedy with murder, cross-examination, exploration, and more. With a clean, intuitive interface and some silky smooth graphics and playback, this is one port you don't want to miss whether you're a fan of the series or a newcomer. 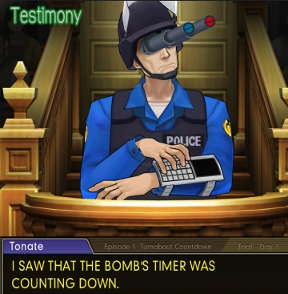 Though fans of the series will get the most out of recurring characters, you can still pick up and play Dual Destinies even if you've never played the original games. As the game options, the first mission has Phoenix and his assistant junior lawyer Athena Cykes trying desperately to prove their client (and Athena's childhood friend) Juniper Woods is innocent of activating a bomb that detonated in a courtroom just the day before and wound up killing a detective. Each case represents its own story with its own case and characters, but play is consistent throughout. When you're not exploring scenes to investigate on your own, the meat and potatoes takes place inside the courtroom where you need to use your wits to prove your case by cross-examining witness statements, presenting evidence, and pointing out inconsistencies and lies. You'll play not just as Phoenix Wright himself, but also returning character Apollo Justice and Athena. Both characters have, um, unique abilities you wouldn't think would typically be accepted in a court of justice, but hey, we are talking about a world that's willing to put a whale on trial for murder and accept whips and coffee as acceptable reprimands during proceedings. The Phoenix Wright series has always been able to turn from goofball gags to dark on a dime, and Dual Destinies pulls out some seriously morbid stuff. Of all the games, however, it's also the one that's the most streamlined for play, allowing players the option to speed up the traditionally slow text, save whenever they want, and even consult their assistant for help at times. 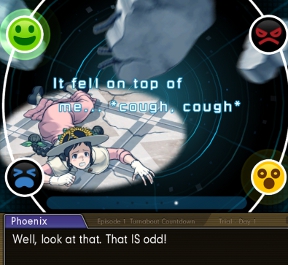 These days porting games to the iOS is nothing new, but the Phoenix Wright series has always seemed like a natural fit, and Dual Destinies is no exception. The interface is simple, clean, and intuitive, and both the animation and the art itself are incredibly vibrant and smooth whether it's a cutscene or the game itself. Capcom's decision to offer the first case free and the others as individual purchases is a great way to allow players to pick up as much or as little of the game as they want instead of having to throw everything down as a lump sum. The initial case is of a nice, substantial length to help you figure out if you want to try the rest, and showcases the best of what fans have come to expect of the series... humour, clever puzzles, and even fiendishly sneaky evidence. Much like 2012's port of Ghost Trick: Phantom Detective, Phoenix Wright: Ace Attorney - Dual Destinies on the iOS is an absurdly good value, and sets new standards for how to port games right. Dual Destinies is professionally polished from every angle and a perfect fit for iOS devices, as easy to play as it is hard to put down, and if you're looking to give the series a try, you're definitely in for a treat.

What! I'm so surprised that they port it to ios! As you say, the game is quite new, and I have never thought that they would port this game.

It's pity they didn't port it to android too. I hope they do though. I really really love Phoenix wright. I have played all games in this series on nds. I am even planning to buy 3ds just to play this game.

I don't think they will ever port it to android though. They never did make one for Phoenix wright trilogy. Now I'm kinda angry at Capcom. I can't really do anything else but frustrate though. I guess I will just have to buy 3ds.

And now I have to watch boot to the head again...

I tried to get this when it came out on 3DS, but since it's rated M and I'm not 18... *sigh* If it were digital and physical, even if you could buy the digital version in Gamestop or something, I would have been able to play it... oh well...

...there go my plans to be productive this week...

...it's already out for iOS. It's actually for iOS and it didn't take them three years to bother to port it.

I am SO HAPPY to hear this. Here I was trying to figure out how to justify buying a 3DS for one downloadable game (especially since I despise the initial 3D concept due to the fact that I can't see 3D), since I figured it wouldn't come out for iOS til something like 2017.