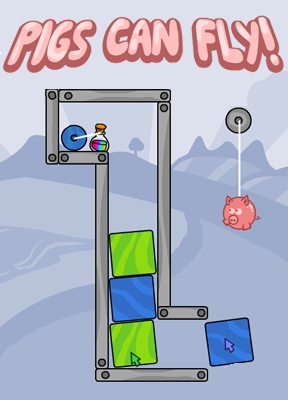 Pigs can fly, which is distressing news for anyone who has promised action when the pink porkers grow wings. You know: "You'll get the bank loan when pigs fly". Turns out all the ungulates needed was a little help from your mouse in Elliot Pace's new physics puzzle game that bends time, Pigs Can Fly.

In Pigs Can Fly you have three colors: green, blue and pink. Each level has obstacles, also in at least one of these three tints. By selecting a color, the cursor can manipulate objects of that color. The objects themselves vary from balloons you pop to rotating cranks to simply dragging. In fact, it all comprises of dragging; the motions you make are relative to the object, but you need the right color cursor to do it.

Here it gets interesting: Once you switch to a different color, the objects you previously moved start animating in the motions you moved them. Now you have to move the objects of the second color in a synchronised set of motions. The idea is to clear the way between a pig and a magic bottle; get piggy to the rainbow and he sprouts wings. Pink is the pig's color and therefor interacts with it. But it's the last color you can use and you cannot use a color twice; it cancels the previous motions recorded.

These limitations form the foundations of the puzzles. Sometimes pink isn't used, but the objective always involved finding the choreographed shuffle between green and blue objects in order to reach the bottle. The puzzles are as creative as the system they use. Wrapped in a blanket of soft graphics, a slightly morose soundtrack and no limits or notches such as a timer or scoring. While writing reviews for this site, you get those moments where you play something and wonder if someone did it before. With all the games swirling out there you can't play everything. But I am certain that the drag-a-pig-by-manipulating-time-and-space hasn't been done yet. And it is so captivating that you will probably end up finishing it in one city. So go on, get those pigs in the air.

Enjoying this game a lot.
Completely stumped on Lv22 now though :/

Trying to harness the pwer of posting :D

Nice and easy, innovative mechanic. Hopefully there'll be a sequel...

SillyB, what are you having trouble with?

I got it eventually bloohoo. I just needed to think ahead ^^ Took me some time though.

Just in case anyone needs a nudge for Lv22

Just because a block isn't there yet it doesn't mean you can't move it yet, or rather do what you would need to do to move it when it does get there

Why do I get the feeling my hint is gonna cause more confusion that is needed? xD

you can use a colour several times...that way you can drag the blockes rather then guess when it will be in the right place

Level 22: This took me a couple of tries, until I realized that

you have to drag where the block will be, and not where it currently is. Complete technique:

Short but cute. My pig-happy five-year-old niece will adore it. :-)

Interesting idea, but i find the controls a bit glitchy: in some of the levels the other cursors does not appear. I can make the individual cursors work, but the "ghost" cursors seem to appear at fairly random... no matter what order I take the colors in...
(running on Firefox+mac)

This game is reminiscent to Cursor*10. Did the author of the game take inspiration from that game?

Cute game... little to no replay value for me, but an amusing diversion. I did get stumped on 2 of the levels (22 was one)... I don't remember the other one, but I finished it in a way that the walkthrough didn't show. I don't think there are many levels where that could be done though, so I probably won't be playing it again. I'll share it with my kids, though!

wanted to enjoy the game but same issue as littlefish, the ghost cursors only show up randomly, no matter the order (mac + safari)

Turns out you were right, I started and finished it in the same city.

Having an ad right above the game that, upon mouseover, opens a full-page ad and makes the game vanish: bad page designer. Bad. No treat.