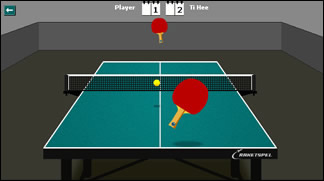 Also known as Table Tennis, this Shockwave game is from the folks that bring you the websites Mini-Clip and Shockplay. The game plays exactly like any ordinary game of Ping Pong, with you playing against one of three selectable computer players. The AI is a formidable opponent—either that or I'm a lousy one—therefore you will have to be alert and play quite well to beat it. As far as gameplay mechanics are concerned, controlling the paddle is as easy as moving the mouse around and you'll find yourself putting some extreme spin on the ball early on in your game. The ball physics react realistically, if not a bit on the extreme side, but overall this game is a fine implementation of a classic Ping Pong game.

And if Ping Pong is your thing, there's a very good Japanese movie called Ping Pong that you might like to see. A group of students, from our Beginning Japanese class, got together to watch it following our final exam a couple of weeks ago. This well-made movie is about a high school table tennis club that competes in various tournaments, and it tells the story of two very gifted young athletes who grew up as friends. It's a heart-warming, feel-good movie that I highly recommend.

"formidable" is an understatment. Wow. Very cool, I'll stick to that 3D pong game tho (don't have a link). Ya know, that one where its black and green? eh. Whatever - this game def. kicked my butt.

I have a link to the 3D version you mention, maybe I should create a post for that one too(?) Or, add it as an update to this one. Hmm...

it goes past the table too often

It's definitely fun, but far too easy.

is there some fundamental law of pingpong i'm missing, or a really ridiculous glitch?

it seems like the only way to score a point is if the computer doesn't get past the net and the ball then rolls off its side. as opposed to, you know, getting it over or under or around the computer's paddle. which would make sense. right?

good game but way too easy

Very nice game, well made. spin is a little extreme but the game is fun.

Ti Hee (Korea) is easy to beat if you find his weakness:

Aim for the corners

Great game....only haven't been able to be Forrest. Only thing I would change is giving it a pause button. For playing at work...ya know.

Excellent game, the physics are very realistic. The only thing that spoils it is there's nothing to keep the cursor inside the window, so you lose lots of points when you accidently go outside.

I'm not sure if this has been mentioned but if you left click on your serve, the ball is tossed into the air for you.

I seriously hate this game. the table on their side is shorter than your side by like a millimeter so if you don't pull your paddle off the screen you end up shooting a millimeter over the table. The base computer saves like no human could, and on match points the difficulty gets jacked up by 3-4x. I had a 10-7 lead on forrest and out of the blue he throws out insane difficulty and wins. It's bull, the stupid diffuculty level makes this game just unplayable.

if you press ctrl or shift when you hit it, it does special stuff... not sure what but its cool :P

That person who wanted to know how you pause the game.
If you right click your mouse it will freeze, if you want to keep it like that , select properties and thee game will stop untill you exit the properties menu.

I've been playing this game for weeks now, and had only beat Ti Hee. Today I finally crush Forest and Scott back to back!

I find its not about putting tons of spin on the ball, just whaling it back and forth between corners as hard as possible (bringing the paddle way out of the screen for each shot). If you can maintain the ball speed just return one slowly and figure out where your paddle is off the screen.

This is a great ping pong game! I've been playing it for ages!

found real difficult to play against ben scott though.