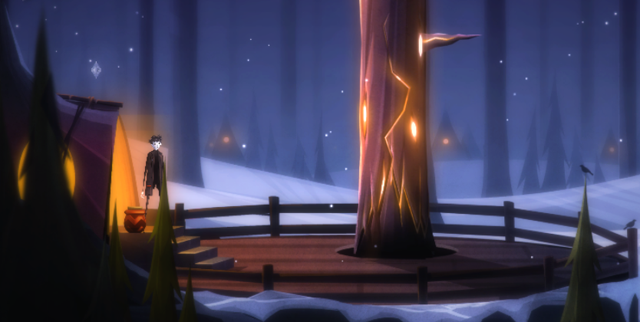 The word literally is quite literally bandied about quite a bit these days. But even still, I think we would all literally go through hell for one of our children. And I don't think I am exaggerating. You. Would. Go. Through. Hell. For your kid. You might even say that hell would freeze over before you would let any farm befall them...

Pinstripe brings you the journey of ex-minister Teddy, beginning innocently enough with him and his three-year-old daughter, Bo, on a train. Bo smells smoke and wants to play detective through the persona of the great Sherlock Holmes, and Teddy obliges her fantasy, agreeing to play Watson. As they head towards the front car of the train, a suspicious looking man tries to lure Bo with the promise of a shiny black balloon. And although you might know that it is elementary advice to not talk to strangers, it takes only a momentary slip of attention for Bo to fall into his grasp.

By far the most astounding feature of this title is that it was written, illustrated, and coded all by Thomas Brush. If that name rings a (Dore) bell, you might recall a previous title of his, Coma, where you are injected into the heavily nuanced, thoughtful mind of a boy during a long rest, accompanied by his sidekick Bird. Another title of his, Skinny, once again told a story, this time accompanied by visuals less cheery and more eerie. If you haven't experienced these games from several years back, you owe it to yourself to check them out (they're free!) and fully explore Mr. Brush's artistic talents, perhaps even before enjoying this one. (The storylines do not seem to have any deep overlap.) 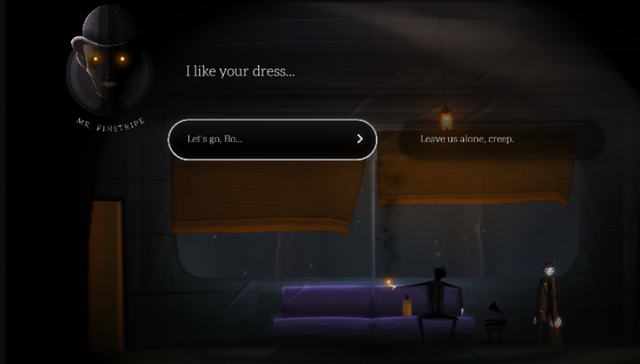 If the stunning art and the melancholy of the frigid hell Teddy soon finds himself plunged into, coupled with the ephemeral background music hasn't yet reeled you in, then Mr. Brush has one more surprise to seal the deal: voice acting. Although somewhat rare in many of these sorts of games, Pinstripe integrates a celebrity cast of voices that project an extra dimension of depth and realism into the story. The evil leaps off the screen and into the pit in your stomach from the first time you see Mr. Pinstripe clad in black, hissing into the child's ear: "I like your dress..." The childlike innocence of Bo as she exclaims in a high-pitched, excited tone: "Let's go investigate!" could not be starker against the dark background and foreboding black balloon sent to lure her away. 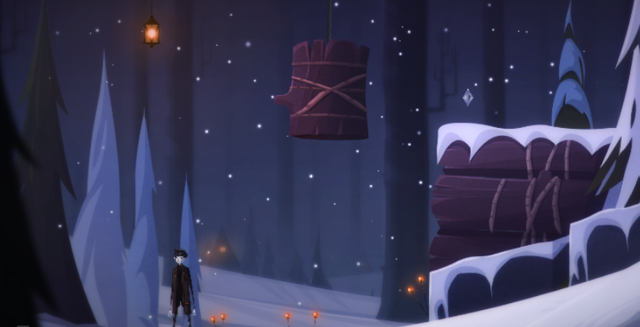 Even as the snow streams down, the juxtaposition between horror and beauty, darkness and light, fear and cruelly snatched away hope pervade through the atmosphere. We all have to confront our demons at one point or another, and Teddy will have to face down his own share in his quest to find his kidnapped daughter. Precious memories like Mommy's locket and Bo's scarf, infused with the smell of smoke and whiskey, join together with more mysterious ones like a secret film strip, becoming all too real in your hands as you try to put back together the pieces of a violently shattered dream. Expect to take your time and explore the areas and clues thoroughly, mixing in a healthy dose of imagination to piece together the story, lest the pieces slip through your fingers like grains of sand.

Similar to the previous two works by the same author, Pinstripe is a platformer with very rich background elements that blend together to bring the experience into the extraordinary. The difficulty in regard to the platforming and mechanics themselves is not that high, so veterans of the genre may find it a bit simplistic, but on the other hand that makes it accessible to gamers of all experience levels. Either the up/left/right arrow keys or [WAD] can be used to control movement or select between dialogue choices, while [Enter] or [Space] confirm options or execute various other actions, like flipping a switch. Later in the game, when you acquire a weapon, the mouse can be used to aim and clicked to shoot.

Pinstripe: Chapter 1 is available for free, and allows you to get a good preview of the game. Chapters 2-5 are being sold on Steam (currently, $15). The price may be a little steep for some, considering it is only a couple hours of gameplay. I would advise playing the free portion and then making a decision on whether to purchase the rest based on how much the gameplay appeals to you. If you do, though, rest assured that your purchase is going to a developer that truly deserves it. Because if Thomas Brush's game doesn't qualify as indie, I don't know what does. I sure hope you'll have a hell of an enjoyable time in the immersion.