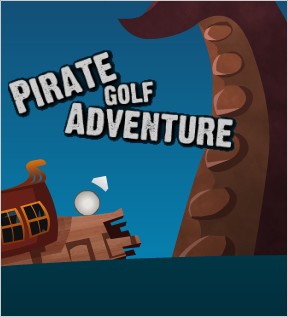 Pirates and golf, the unlikeliest pairing since chocolate syrup and trombones, feature heavily in Pirate Golf Adventure, the debut Flash game from German game maker Dennis Treder. Help Caribo the Pirate board a ship, avoid being eaten by a kraken, rescue a beautiful maiden, and find a way off a hazardous island by (what else?) hitting a golf ball into a hole.

Aim with the mouse cursor and hold down the mouse button to build up power. Release to shoot, or just keep holding the button to shoot at max power. Navigate your way through eight stylishly illustrated holes, including some unique obstacles and moving terrain. You can earn bonus points for collecting coins and taking fewer shots. The physics seem pretty loose at first, but after a couple of holes of getting used to them, they actually feel quite solid. And hey, no biggie if you over or under-shoot, since you can HIT THE BALL AGAIN IN MIDAIR!!! Zaumguh!

While we're on the topic of things that are totally unbelievable, how about that story, huh? I mean I'm all for brief cutscenes, but here you have a spunky young pirate join a ship, be attacked by a kraken, escape to an island, consult the useless captain, rescue a island native, escape her cannibal parents, visit a gigantic talking bird and fly off into the sunset, all in a couple dozen lines of dialogue! Zooming through the story means everything's as clichéd as… well, you know, that one thing people do… where they're sorta vague… about something everybody's seen before. But hey, we're talking about golfing pirates here.

The bottom line on Pirate Golf Adventure: it's cute and fun, with good level design and an almost unprecedentedly cheesy story. Kids will definitely enjoy playing it, yet the coins and achievements offer plenty of challenges for adults as well. It's a nice way to blow off 10 minutes, or even a couple of arrrrrrrrrghs!

Short, boring, and easy, I'm surprised I didn't nod off during this one. The story was boring, cut and paste insert plot here sort of stuff, and so I have no idea why the plot took up a quarter of the review when it's entirely unnecessary and barely even worth mentioning. The ball physics are a bit of fun, but the game is so short and easy that you never really get into them. The last bit of the review is false, there is no "achievements" to speak of, as far as I can see, and there's really no replay value other than getting a high score, and honestly, no one will really care all that much about their score. It got a bit enjoyable, in the last few levels when they were more complex, but it's hardly worth the load time to play it when it's so darn short.

The achievements are shown on starting a new game after you've completed the game once.

For me the ability to shoot while moving doesn't really add anything good to the basic golf idea. Everything is slowed down to give you a chance at making the shots but it still feels like you have little control.

The story was a little odd, but I think it adds some depth to the game and doesn't distract too much. I LOVE shooting in midair :) Finally a golf game I can play ;). And great graphics! although it's a little short...

I can't get this working for some reason - it just stays on the loading page perpetually. Tried three different browsers, two different computers, and three different websites hosting it - no dice. Anyone else having issues with it?

When were chocolate syrup and trombones paired up?

Dusky-skinned island girl + cannibalism = FAIL. Aren't we beyond that kind of stereotyping?

I love the game but that joke really bothers me.

We're probably also beyond pirates with eye patches and parrots, but it fits with the theme and genre. To be honest I didn't care at all about how many strokes I took, I just had fun collecting all the coins. It's a nice idea for a game with some good implementation, up to a point. It felt like a demo.

Could someone list all the different unlockables? I'd be really kind.

The girl doesn't do cannibalism, just her parents ;)

I also had problems accessing the game this morning... maybe some advertising connection garbage... however, now it's working :) nice game :)